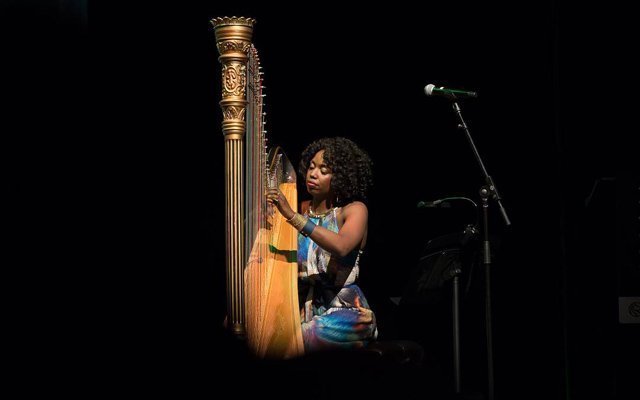 Perhaps the most striking aspect of her playing is her ability to make the leap – her enormous harp in toe – from chamber music into the realm of popular music. And with that being the case, imagine how much more difficult it is to play Jazz with all of the changes that the music demands. Miss Younger likens it to playing some form of “Giant Steps” each and every time you step out to play. “Playing the harp is playing an absolute diatonic instrument,” she says. “Every time you have to change a key – literally translated as playing a “black” note; i.e., a ♯ or a ♭ – you have to change a pedal!” She tells an interesting story about the time when Gary Bartz played that very track “Giant Steps” on his 1978 recording Love affair. The chords change, famously, with literally every bar in the song, so he said to her, ‘Just come in and out as you please’… and the rest is history.”

In fact one can never really understand the impact of playing the harp – particularly in Jazz, with all the changes the music demands – especially when it comes to the pioneering work done by musicians such as Miss Ashby and Alice Coltrane. Ironically George Russell’s magical palimpsest, the Lydian Chromatic Concept of Tonal Organization comes into play. Mr Russell’s concepts explained how it was possible to play modal music essentially in the Lydian mode, something that has captivated musicians since Miles Davis and John Coltrane and now continued by McCoy Tyner downwards. For the technically inclined: Modal music – based on modes; alternative tonalities (scales) that can be derived from the familiar major scale by starting on a different scale tone – uses diatonic scales that are not necessarily major or minor and does not use functional harmony as we understand it within tonality. The term modal is most often associated with the eight church modes. The tonal center of these modes is called its “final”. All the church modes use a pattern of half and whole steps that could be played on the white keys of a piano.

This also puts into perspective how modal music is a harpist’s delight. As – to repeat from above – “All the church modes use a pattern of half and whole steps that could be played on the white keys of a piano.” Now, align that with the fact that plucking or strumming the harp strings is like playing the equivalent of the piano’s white notes only. And now, here is what one refers to “the kicker” in today’s language: the melody of all Spiritual Music (Negro Spirituals, that is,) is written to be played on black notes only. So putting this into perspective to explain the ingenuity of American Jazz harpist such as Miss Ashby, Miss Coltrane and Miss Younger have done is to literally re-invent the instrument in the context of the very lingua franca of music itself. Why those three musicians in particular? Quite simply, because by definition, Jazz is “Black American Music”; it is the invention of the Black American which has now been adopted by the rest of the world in contemporary music.

It would now seem exquisitely natural for Miss Younger to have made her iconic album Soul Awakening – what might have been a debut album, had she not decided to shelve the project out of an abundance of modesty, until 2019 – her own musical palimpsest. It is a deeply moving and incredibly mature statement that first began its life seven years ago and was completed a year after that, in 2013. It is also, as Miss Younger says, the time when she came to work with saxophonists Ravi Coltrane and Antoine Roney, and bassist Dezron Douglas. Another musician she would give credit for is EJ Strickland, the drummer on that date. “For some of the things I’ve done – and continue to do – I absolutely need drums and bass,” she says. “The rhythm section plays a big role in my sound. On a professional level, because I never sought out everything I now have, it’s just icing on the cake,” she insists.

Somehow, it is almost uncanny how Miss Younger’s career seems to have been shaped up to that point in a manner eerily similar to the path on which Miss Ashby was also led. Miss Ashby with Earth, Wind and Fire, and Bill Withers among others until she broke through with Afro-Harping, her magnum opus, and Miss Younger on a path via Ryan Leslie, Derrick Hodge, Salaam Remi and others until her own magical (and literal) Soul Awakening; which brings us back to the analogy of Milt Jackson and the vibraphone. You see, while the trajectory of harp musicians has led them to re-reading chamber music on the harp in different settings, and even despite the pioneering work done by Miss Ashby and Alice Coltrane in interpreting the music of Jazz on the harp, something no one has really done consistently until Miss Younger came along is to unveil the ethereal soul of the mysterious and celestial “blue note” on the harp. And anyone who has heard Milt Jackson (as opposed to any other vibraphone musician) play will know exactly what this means. It’s literally a miraculous experience.