If ever there was a case for designating a single label as a museum dedicated to the preservation of Jazz Music with art exhibits dedicated to Bill Evans and Wes Montgomery that honour would, hands down, go to Resonance Records with George Klabin [and Zev Feldman] as Curators-in-Chief of those exhibits. The case is strong. There are already five dedicated to Wes Montgomery, the first Jazz great guitarist after Charlie Christian, and six exhibits dedicated to Bill Evans’ trios including one [from the label’s mid-priced series The Takao Fujioka Collection, a sampler that gathers music from a few of his performances] that serves as an an homage to his genius. Eleven of Resonance’s “museum” exhibits. 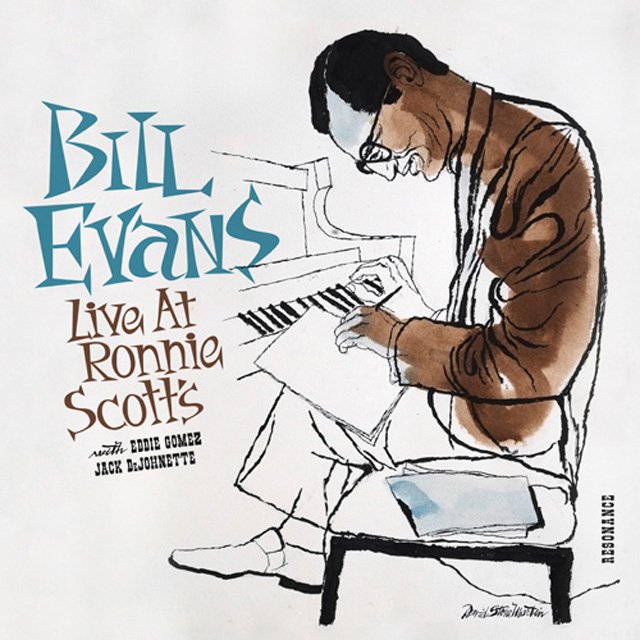 Bill Evans: Live at Ronnie Scott’s is the third in the Resonance series featuring a relatively-speaking “less” celebrated trio that included Jack DeJohnette – all of them from a tour of Europe in 1968. This date at Ronnie Scott’s is special perhaps because it comes from a month-long residency at the iconic London club, Ronnie Scott’s. The importance of being able to play such a long residency cannot be over-estimated; it can, in fact, be heard to magnificent effect in songs – such as “You’re Gonna Hear from Me” and “Emily” that were played [and recorded here] on separate occasions. The feeling of oneness among the members of the trio – of trusting one another enough to be able to leap off into the unknown; of using each of her as invisible safety-nets in order to stretch and explore melodic and harmonic inventions is palpable here, as it is elsewhere on the recording; on Mr Evans standards “Very Early” and “Waltz for Debby”, for instance.

It is well-known [and also well-documented] that Bill Evans had a hard time settling back into music after Scott LaFaro tragically passed away in 1965. While he seemed to find a soul mate in Eddie Gomez, it felt as if he was left groping – at least for a time – with drummers [and there is a concert that has been taped at a television studio in Europe where he interrupts his performance several times to instruct drummer Alex Riel how he wanted to get a particular rhythmic feel to song.] We find none of this with the trio that included Jack DeJohnette, who joined Mr Evans’ trio in 1968, the same year the group headlined the Montreux Jazz Festival and produced the album Bill Evans at the Montreux Jazz Festival – all this before Mr DeJohnette returned toured Europe with the trio, returning stateside to work briefly with Stan Getz and his quartet before he joined – and recorded several seminal recordings with Miles Davis.

Mr DeJohnette had the presence of mind to record these live sessions with Bill Evans’ trio at Ronnie Scott’s and, of course, Zev Feldman with his incomparable ability to sniff out seemingly “lost” recorded documents got wind of this set from July 1968. Then, as a result of bringing the long arm of Resonance – George Klabin and his art of A & R, research, production and post-production [read that as Fran Gala], as well as legal and other aspects of doing the right things right – we have yet another priceless two-disc set documenting the return of Bill Evans [if you will] after the dismantling of his most famous [1964-65] trio. And that too bears mention because Mr Evans, in the quietude of his extraordinary trio music, had already re-defined three-way Jazz conversations – in fact he had done so before his first trio, in 1959, when he helped shape Miles Davis’ ground-breaking album Kind of Blue [Columbia].

The translucent, near-spiritual beauty of Mr Evans’ playing is all over this recording – celestial on “Turn Out the Stars” – drenched in soulful angst in “My Man’s Gone Now” , hypnotic and hopeful on “Someday My Prince Will Come”, elementally melancholic on “Alfie”, breathtakingly beautiful on “Very Early” and “Waltz for Debby” and soaring again in an ethereal sort of way on “Nardis”. Eddie Gomez is right there with Mr Evans, his rumbling – and often weeping gravitas – accompanying the great pianist with epic empathy and even pathos like a player in a classic Grecian drama. By 1968 you get a bit used to that empathetic performance from the prodigiously-gifted bassist. The surprise is how seamlessly Jack DeJohnette fits into Mr Evans’ musical conception. On the other hand, perhaps this is not really surprising considering Mr DeJohnette’s impressive sense of belonging almost entirely to the music – and by that one means: music in general.

It is a music that seems to exist in solitary splendour; a performance that makes one feel that this is more than just a musical document of a particular period; it is, in fact, essential part of the music’s history as well as a kind of “bearing witness” to the continuing development of Bill Evans – the musician. The sense that often this music comes as a result of a rush of blood through the veins of the pianist is very real. There is no tentative probing and poking at a melody to find the optimal point from which to take off into the stratosphere and re-harmonise a tune, de-construct the song before sculpting long inventions and sensuous improvisations so much so that the song itself becomes a re-invention of itself. Fortuitously Eddie Gomez was there with Mr Evans, as was Jack DeJohnette not only to erect an elegant rhythmic edifice, but – in the drummer’s case, in this instance – to record it all.

Bill Evans left us several epic documents of his live performances. His two residencies at The Village Vanguard – with Scott LaFaro and Paul Motian [Riverside, June 1961] and with Marc Johnson and Joe LaBarbera [Nonesuch, 1980] are among the most valued collectables of all live music for aficionados of great music to listen to with a true sense of wonder. To those great live performances, one can surely add Resonance Records’ five live recording releases from 1968 and 1969 – especially the ones where Mr Evans performed in Europe. Each is a recording to die for. Yet somehow, this set from Ronnie Scott’s seems to be a little more special. The packaging, for instance, takes us back to the days of classic record-cover art, with the late David Stone-Martin’s exquisite illustrations worked into a retro-design by art director John Sellards; perhaps it’s also the combination of informative and passionate essays and interviews with Mr Gomez and Mr DeJohnette, and old photographs you cannot help but devour with your eyes and mind.

And perhaps its also the fact that despite all of this embarrassment of riches, what carries a little more weight is the boundless energy of the three musicians that seems to be ignited with the throwing of a nuclear switch by the drumming of Jack DeJohnette in that trio that has something to do with it… no matter what, it’s an album to die for.