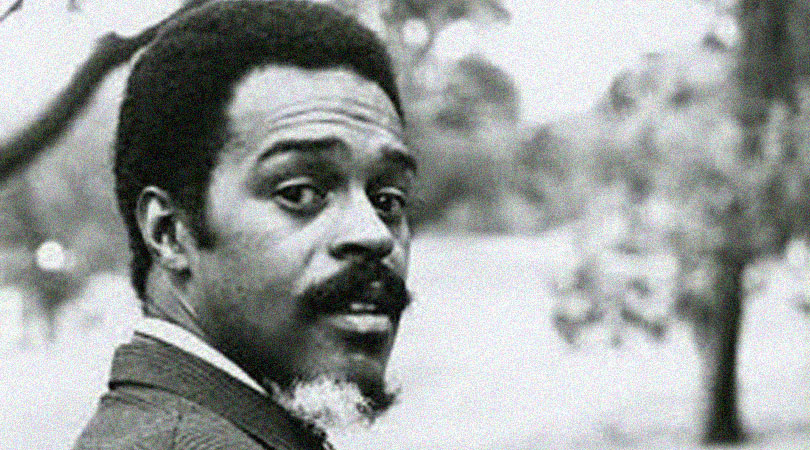 There is a psalm – Psalm 130, to be precise – the first verse of which sounds like the most elemental cry of pain: “Out of the depths have I cried unto thee, O Lord./Lord, hear my voice!/Let thine ears be attentive to the voice of my supplications!…” In verse two the cry is sublimated in a deep yearning and begins as follows: “I wait for the Lord, my soul doth wait,/And in his word do I hope./My soul waiteth for the Lord/More than they that watch for the morning:/I say, more than they that watch for the morning…” These are almost always the first words that come to the mind’s mind when listening to music played by Albert Ayler. The reason for this is that keening, prescient spirituality that issues from his tenor saxophone is unlike anything one hears a human being make with his voice – through an instrument [any instrument], or otherwise.

The sound does not seem to come from air propelled with powerful diaphragmatic breath, from the bottom of the lungs. It seems to come from a place much deeper than that. It is more like the collision of the seven chakras, from the root chakra at the bottom of the spine, to the crown chakra, at the very top of the head, each screeching note and wailing phrase, a cleansing of body, mind and spirit; the cry of the very soul, unhinged by a pain so terrible that it is only utterable and expressed as Mr Ayler did every time he played. Somehow, words such as “spirit” and “soul” cease to be dryly philosophical or theological terms but become animated – coalescing in the supernatural sounds of the tenor saxophonist. The fact that Mr Ayler found comfort in recognising his place in the musical continuum is something he [himself] expressed in what will forever be recognised in another prescient aphorism associated with him: “Trane was the father. Pharoah was the son. I was the holy ghost.” 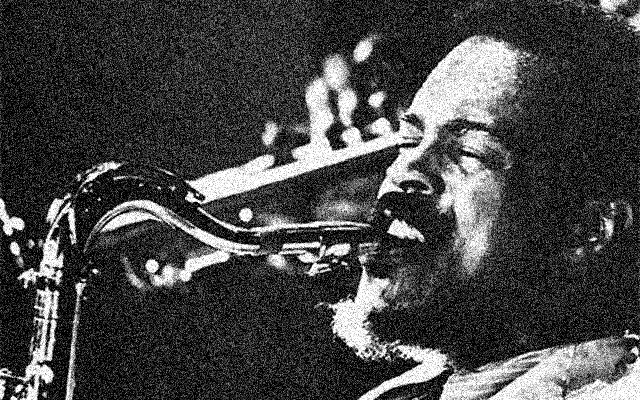 Mr Ayler’s melodic lines are questing and radiant. His phrases soar on spiritual flights; journeys through another world into which he beckons you with cries that are at once zealous, reflective, and transcendent. A gossamer thread of mysticism connects the scores, each of which explodes with nuclear intensity as if from the corona of the sun. Each is mesmerising, irresistible and gem-like whetting the appetite for more. Each silvery supplication is a kind of poème mystique, evoking a long haunting scene; each of which glimmers inexorably, interlacing one into another, woven in poignant lines that end – sometimes with rhetorical fervour and always laced with seemingly endless, broad-brimmed vibrato – with dramatic and ardent flourishes, inviting the other instruments to join in the rapture.

As much as that has an almost quaint, prophetic ring to it, one cannot escape the fact that it has, in fact, a very loud ring of truth to it. And that truth goes right to the heart of Mr Ayler – as a person, and particularly as a human being who spoke through his music. His spirituality ran deep – deep as the river – and it soared high, to the rarefied realms in the quintessential “praiseworthy” melodic intent of his music – conceived as if in a psaltery all its own. Refuseniks who could not countenance this during his lifetime as well as today would do well to go back to a monumental recording he made, entitled Goin’ Home [Black Lion, 1964]. It is but a short, sharp and eternal leap from the repertoire of that record to every one of the songs that Mr Ayler wrote and performed ever since. For one can draw a straight line – a genealogy that puts Mr Ayler not only at the heart of the music, but also puts a stamp on his own unique genius.

Why debate “genius”? Well, the reason for one, Brian Morton touches upon it briefly in his notes to the quartet recording, European Recordings Autumn 1964 Revisited, the first [double disc] under review. The other reason is that Mr Ayler seems to be the very definition of one; Artistic genius is something that cannot be defined. Indeed, this is its very characteristic. Those who live with it cannot reveal its secrets; only embody them. Subsumed by its contradictions, geniuses are ill at ease in the world, alarmed by their uniqueness, blinded by a truth that common mortals can only dimly perceive and swept along by a force that is beyond them. As Baudelaire once said: “genius is no more than childhood, captured at will.” And this is exactly what Albert Ayler is – one of a rare breed that, when he plays his instrument, he completely bonds with it. The tenor saxophone – when he pays it – is no longer a tenor saxophone, it is a violin, a harp, a clarinet, a piano. It is the whole crashing orchestra combined with a chorus of angels and propelled through the human voice. It is music in spirit and flesh. 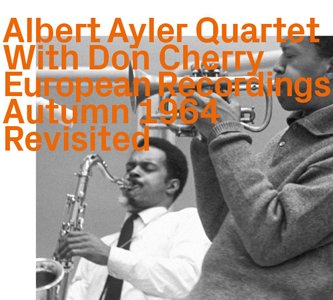 Albert Ayler Quartet with Don Cherry: European Recordings Autumn 1964 Revisited Mr Ayler first became familiar with audiences in Europe after his stint in the US Armed Forces in the second half of the 1950s. When he returned to the continent in the 1960s, he was already a full-formed musician who had performed with Cecil Taylor and, in 1964, had also recorded his epic and iconic album Spirits. His relationship with Bernard Stollman had fructified nicely and he now attracted the great brass musician, Don Cherry, who joined his quartet for this foray into Europe. The partnership between tenor saxophonist and Mr Cherry, here heard on pocket cornet reflects a symbiosis that is uncanny and often breathtaking.

The repertoire is absorbing. In these performances both Mr Ayler and Mr Cherry are like loping gazelles, striding with elegance and power from end to end. The music dazzles with virtuosity, is always lyrical and deeply profound. The charts are collected from three shows in the Netherlands where the group must have created quite a sensation. Throughout, Mr Ayler plays with consummate sensitivity and flair, using his famously sonorous vibrato to create something vibrantly expressive. Bassist Gary Peacock and – especially – drummer Sunny Murray stride alongside the front-facing horn men becoming a perfectly fused musical force. Mr Murray is at his fiercest best as he brings his asymmetrical tempi – and joy – to such standards ass “Spirits”, “Saints” and Mr Cherry’s “Infant Happiness”. 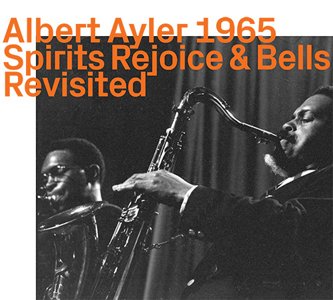 Albert Ayler 1965: Spirits Rejoice & Bells Revisited The gorgeous energy and occasional dark corners of this recording are magnified by the presence of Mr Ayler’s younger, trumpet-playing brother Donald. The adventurous, equally brilliant protagonists deliver deliriously powerful performances throughout – most poignantly, of course – on “Spirits Rejoice” and “Holy Family”. However, everywhere the music comes alive with fire and uncommon breathtaking hooks and ladders that both swing and vault the music to the rarefied realm. While the Ayler brothers seem forged in the same fire, reflections of one another’s tortured psyches, they draw the often-expanded group into this intoxicating mix of passion and virtuoso beauty.

The presence of Call Cobbs’ harmonically radiant harpsichord is especially suited to creating the celestial aura around “Angels”. The sheer ingenuity and beguiling sound world of the interaction between composition and improvisation speak very much in favour of Albert Ayler’s authorship. More red-blooded rhythmic interactions come by way of the two bassists Henry Grimes and Gary Peacock as well as with Lewis Worrell [when he comes in to play]. Sunny Murray creates his proverbial wall of thunder and lightning, and the ever-brilliant Charles Tyler makes his sensational recording debut here. 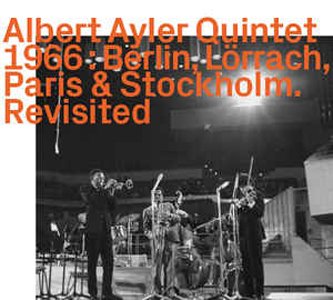 Albert Ayler Quintet 1966: Berlin, Lörrach, Paris & Stockholm Revisited Like the other two recordings this one too [another double-disc] is part of the Revisited series. In terms of poignant passion and wild exhortation this music – played in various cities across the continent – continues to make the kind of powerful impression that Albert Ayler made not only on the saxophone but on music in general throughout the short time that his spirit roamed the earth. Much of the repertoire continues to include Mr Ayler’s standards – “Bells”, “Prophet” and “Ghosts” all of which he plays with big, echoing phrasing that continues to push the boundaries of his music ever-onward. Significantly, though, he adds new music to the familiar programme.

The first of these is a prophetic piece called “Truth is Marching In”, “Spiritual Rebirth – Light in Darkness – Infinite Spirit”, and, most prescient of all “Omega [is the Alpha]”. This music is specially suffused with admirable clarity and definition of Mr Ayler’s visionary artistry; and is performed with polish and brio – qualities that all the musicians, especially Donald Ayler [but also including] violinist Michel Samson, bassist William Folwell and the great drummer and percussion colourist Beaver Harris – all of whom bring their unique interpretative touch and instinctive rapport. Together with their elegance and passion, this all adds up to something truly special.