Home Imperatives Jimmy Giuffre 3: Bremen & Stuttgart 1961
The vitality and brilliance of each invention shines forth in the strongest and most appealing orchestral colours. The dynamic range and balance between the instruments is achieved by each artist never seeming to tread on the other’s turf. It’s almost as if soloing is done in a series of shy dance moves as the clarinet moves into the spotlight while piano is in the shadows; then switching roles as if by magic so that the other instrumentalist is spotlighted. Every so often this interminable dance features Jimmy Giuffre and Steve Swallow.

The inspiration of course also comes from the memorable repertoire that seems to be musical manna, fallen from the heavens. The quiet and luscious warmth of Giuffre’s playing is particularly exquisite in the flowing tempo of “Suite for Germany” as the clarinetist sends up phrase after phrase of delicate ritenutos which gently nudge Bley into a rarefied realm of his own. 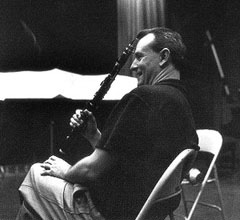 Rhythm, indeed, is strongly marked throughout, emphasizing the unforgettable individuality of Steve Swallow’s playing but also that of Paul Bley; both of embrace Jimmy Giuffre with breathless excitement throughout this extraordinary set.