Home Imperatives Jimmy Giuffre 3: Bremen & Stuttgart 1961
Jimmy Giuffre was one of music’s most adventurous clarinetists, composers and arrangers whose 50-year journey through music led him from writing the Woody Herman anthem “Four Brothers” through minimalist, drummer-less trios and striking experimental orchestral works. Giuffre’s 1961 recordings with Paul Bley and Steve Swallow – notably, the Bremen & Stuttgart (radio) performances – have not really been received with the kind of ebullient embrace as they deserved since their 1993 release in Switzerland. Until this release on the British, EMANEM label.

Among the half-dozen or so instruments he played, from bass flute to soprano saxophone, it was the clarinet that gave him a signature sound; it was a dark, velvety tone, centering in the lower register, pure but rarely forceful; an altogether iconoclastic hero. His first breakthrough album, “Tangents in Jazz” (1955), did away with chordal instruments like piano or guitar two years before Sonny Rollins famously did so; his trios from 1956 to 1961 were without a drummer, prefiguring the quieter, and classical-timbre music of the Jimmy Giuffre 4 recordings on Black Saint and Soul Note.

In late-50s versions of the Jimmy Giuffre Three — with the guitarist Jim Hall and the bassist Ralph Peña, then Mr. Hall and the trombonist Bob Brookmeyer — Giuffre gained some commercial renown. If Mr. Giuffre was long on ideas, he was not a partisan in esthetic matters. Though he prized his even, smooth sound quality on clarinet, 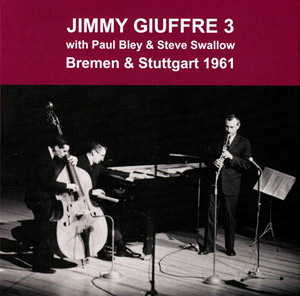 he did not disdain players who had a more fractured sound, never seeing an irreconcilable split between American and European influences. Consequently instrumentation for his late-50s trios had a very distinctly-coloured European inspiration.

But Jimmy Giuffre never turned away from his nuanced sense of rustic, bluesy Americana. Then, while at Lenox, Giuffre first encountered Ornette Coleman, a scholarship student at the school in 1959. Giuffre was knocked sideways by Coleman’s conviction and freedom. It was (Giuffre’s) ecstatic transformation. Giuffre changed his music again. The result was the moody, overlapping improvisations with no fixed key or tempo that characterise the playing of his trio with Paul Bley and Steve Swallow. This trio lasted for less than two years, playing ever-more-uncompromising music.

The 1961 edition of the Jimmy Giuffre Trio, with Bley and Swallow, reunited sporadically for performances and recordings, including “The Life of a Trio” (Owl, 1990) and “Conversations with a Goose” (Soul Note, 1992); However, it was in the 1961 incarnation of the trio, where Steve Swallow played acoustic bass and Jimmy Giuffre played clarinet and the trio performed live, that the trio reached its proverbial zenith. The trio performances (and piano-bass duets) were first released in 1993 by Werner X. Uehlinger’s hatHUT label before this EMANEM release.

Somehow the term ‘less is more’ does not even begin to describe the manner in which this music by the Jimmy Giuffre 3 shines in all its radiant apparel, creating an unmatched nimbleness of sound. And yet this is no stripped-down trio performance, but a full and wholesome recreation of magical dialogues between Giuffre, Paul Bley and Steve Swallow. The ebullient arpeggios and brilliantly crafted glissandi, characteristically and gorgeously Giuffre create hidden angles for Paul Bley’s acute slants and Steve Swallow’s rumbling bass lines.