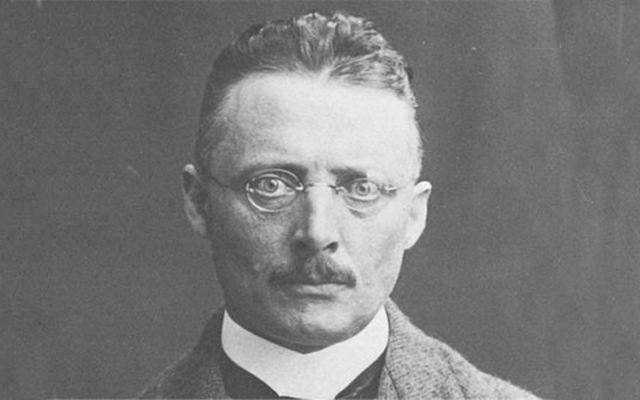 Dominic Alexander is the Books Editor of Counterfire, a leftist tabloid and online journal published in Britain. Alexander is also a Stop the War and anti-austerity activist in north London and has been one for some time. He is a published historian whose work includes the book Saints and Animals in the Middle Ages (200pp, Boydell and Brewer Ltd, 2008), a social history of medieval wonder tales.

In 2010, Dominic Alexander, the Books Editor of Counterfire published a review of The Necessity of Art: A Marxist Approach an iconic affirmation of all art, by the legendary Austrian thinker and critic, Ernst Fischer that was published in 1959, in Dresden, erstwhile East Germany. The German edition was subsequently translated by Anna Bostok in 1963 and has been re-published several times since then. This review of the 2010 reprint first appeared in Counterfire on July 23, 2010. It is a sterling piece of literary criticism, worthy of its subject, Fischer’s seminal work. It has been published in full below:

“In this classic work the veteran Austrian communist Ernst Fischer set himself what might seem an impossible task, to provide a Marxist analysis of not just visual art, but literature and music also, from their very origins to the present.

“This is an impossible task, but Fischer’s book did succeed in showing how Marxism could provide an understanding of all these areas of art in general, with some powerful analysis of particular problems. Verso’s welcome reprint comes with an introduction by John Berger, who dedicated his brilliant Success and Failure of Picasso (1965) in part to Fischer.

“Fischer’s title, the ‘necessity of art’, refers to his argument that art is not some optional form of entertainment, a pleasant luxury of civilised life, but an essential or constitutive part of human consciousness and social being. Art in its widest sense is rooted in the same complex that gives us language; the ability to make and understand symbols. 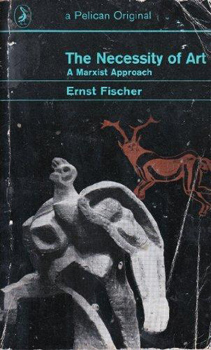 “Marx and Engels both argued that conscious work, the fashioning of tools with a pre-existing purpose, was integral to the development of human consciousness itself. The Marxist archaeologist, Gordon Childe, had further developed this argument, and Fischer shows how art is part of the same process whereby ‘language came into being together with tools’. The concerns of art follow as a matter of course from the nature of language itself. Poetry, for example grapples with ‘the twofold nature of language as a means of communication and expression, as an image of reality and a sign for it, as a ‘sensory’ grasping of the object and as an abstraction’. (27)

“Art in capitalist society may appear as a discrete area of leisure or luxury, but this is wholly exceptional for human society. To begin with, Fischer argues, art was humanity’s attempt to control the world. Art and magic were the same thing: ‘The newly acquired power to grasp and control objects, to prompt social activity and bring about events by means of signs, images, and words, led him to expect the magical power of language to be infinite.’ (34) There have been various interpretations of Upper Palaeolithic cave paintings, which are key to Fischer’s case, but that these images were attempts to influence the outside world seems undeniable.

“The book was written in the late 1950s and sometimes this shows. Fischer’s enthusiasm for Frazer’s Golden Bough would not have much support from anthropologists today, for example. Equally the theories of language then in vogue have been superseded. However, the essential importance and direction of Fischer’s arguments about art are not significantly undermined by new thinking. It is a sign of the strength of the Marxism that Fischer employs in this book that his arguments have survived so well across the past forty years.

“The synthesis of art and magic was broken, for Fischer, by the rise of class society. The experience of pre-class society was of the unity of all things, human, animal, plant and stone. This is the necessary premise for magic. However as tribal unity was destroyed by the division of labour and private property, so the experience of alienation became central to art. The function of art was then to restore the sense of unity. As an aristocracy sought to control art for the sake of its own rule, art and magic began to separate. But art from this point on became contradictory, as the ‘Apollonian glorification of power’ vied with ‘the Dionysian revolt from below’ even within the work of a single artist. (41) Fischer’s comments here appear to be universalising ancient Greek culture, but instead he was establishing a dialectical method of analysis that could be fruitfully applied to any society. Indeed Fischer later on gives a fascinating account of the development of art in Ancient Egypt, claiming it as more important than classical Greek art. 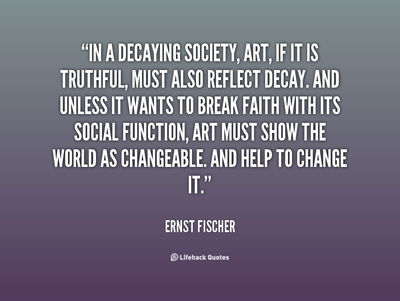 “It is the theme of alienation which links the various different discussions in this book. Fischer was not attempting to give a complete account of each major period of art, but he does succeed in sketching out an approach which is as powerful in discussing the Gothic style, as the Romantic Movement or as the Impressionists. The romantics in particular illustrate the problem of art under capitalism. The celebration of the infinite individual was unleashed by the French Revolution and the promises of capitalism, but the romantics soon found themselves disillusioned with bourgeois reality. This led them in opposite directions, with some leaning towards revolutionary ideas, and others, particularly in Germany, retreating to reactionary dreams of imaginary medieval idylls.

“There is a nice discussion of Baudelaire which perfectly illustrates the dilemma of the romantic artist. His shock tactics illustrate his disgust at the bourgeoisie while the artist was seeking a market from the same source. The very same contradictions and dilemmas that Fischer found among the Romantics can be found among contemporary conceptual artists. The subjective experience of reality and the decomposition of collective meaning were problems set in the nineteenth century by the victory of capitalism and bourgeois society, and they remain vital. Whether you consider contemporary artists to be exciting and genuine or underwhelming frauds, their art is bound up with the same problem of the individual as were the Romantics. The alienation that troubled past artists has become pathologically central to modern conceptual artists, whether they are embracing tawdry bourgeois reality or painfully trying to find ways of escaping its grasp.

“Fischer is not a comprehensive guide to the social interpretation of art, but is more useful than such a book would be. He provides a set of conceptual tools, and a subtle analysis that can be applied to any form of art of any human society. Particular judgements can be set aside, particularly relating to art in the supposedly ‘socialist’ states of the era, without this affecting his general method. Even so, Fischer’s lucid and intriguing comments on a great range of artists, styles and problems in the history of art, are an invaluable starting point for any discussion.”