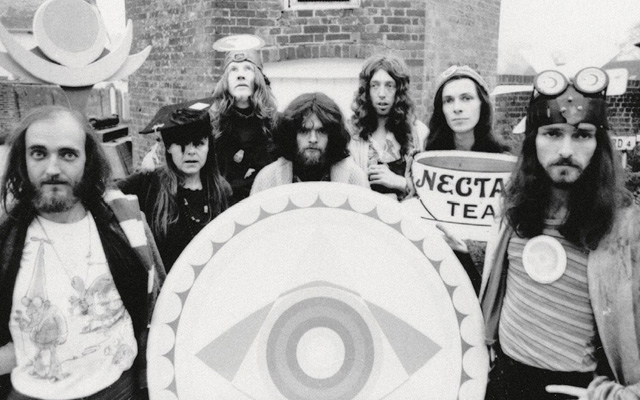 Through a convoluted train of events he obtained a set of surrealistic 19th century gynaecological surgical instruments and started experimenting with them on a guitar given to him by Errol Flynn’s son, channelling spaced-out glissando drones through a state-of-the-art echo chamber. “I acted like I’d never seen a guitar before and tried to get to that innocent place, just kind of abandon myself for better or worse… sometimes you fall flat on your face,” he explains. “Making mistakes is the way to wisdom, because that way you will evolve more quickly. A fantastic error is something that is very memorable, a splendid thing. There should be monuments to errors… most monuments are errors anyway!” The Gong experiment – conceived as a fluid community of spiritual and sonic “floating anarchy” – took shape when Allen enlisted his partner, the Welsh poet Gilli Smyth (who provided eroticised incantations known as the “space whisper”) and the classically trained saxophonist, Didier Malherbe, who was discovered in a cave on Robert Graves’s estate. Without hearing a note, the band was signed to anti-establishment record company BYG by an opportunistic entrepreneur.

By now Allen’s talent was auto-kinetic and the albums Magic Brother/Mystic Sister (1969), Camembert Electrique (1971) and Bananamoon (1971) – which, according to Bowie, contained the glam blueprint – followed in rapid succession. When Gong stole the show at the first ever Glastonbury Festival in 1971, Richard Branson signed them to Virgin and pumped them full of enough money to go hog-wild in the studio. Against a backdrop of sybaritic communal living and shared ideas, the band realised what must rank as one of the most quixotic flights of musical fantasy ever recorded, the Radio Gnome trilogy: Flying Teapot (1973), Angel’s Egg (1973) and You (1974) – which chronicle “Zero The Hero’s” quest for spiritual fulfilment and features an ensemble cast of Octave Doctors, Flying Teapots and, among other things, Pot Head Pixies.

A demented crystallisation of Allen’s mythic vision, Radio Gnome subsumed and distorted jazz, funk, soul and stratified electronics with an irrepressible sense of fun. In Gong Dreaming 1 Allen writes, “It was very clear to me that laughter was a vital ingredient and could be used as camouflage – absurdity was the ideal shield”. So too was sex. Allen’s eyes light up as he explains in detail how the 13th century Spanish troubadours instigated one of the most musically fecund periods of all time and are, ultimately, counted among his greatest muses.“I always use a lot of sexual imagery because it is the creative source,” he says. “There’s no reason you can’t have both the spiritual and sexual in music, unless of course you’re a Catholic!” In the mid-70s Allen abruptly quit the band at the height of its commercial power, allegedly because a “force field” prevented him from going on stage, although perhaps it is more likely that he simply felt the need to evolve elsewhere. Since then Allen’s gone on to record a string of solo albums, helmed new bands such as the University of Errors and the improvisational unit Brainville 3 (with Soft Machine’s Hugh Hopper), and fronted various incarnations of Gong (including two incredible speaker-blasting collaborations with Japanese kindred spirits Acid Mother Temple).

The legend of Gong, meanwhile, has thrived, spawning a whole family of weird offshoots, most of which are reunited at the sporadically arranged ‘Gong Unconvention’ – a mini-festival dedicated to all things Gong (the last one took place in Amsterdam in 2006).“Sometimes it bewilders me why my work is not better known, sometimes it bewilders me why it is known at all,” Allen says with a laugh, finishing his pint as his girlfriend gets out a cigarette. “The art of surviving in rock music is to never let yourself become too popular and never play for more than 1,500 people if you can avoid it, as it becomes an abstract thing within an abstract thing – it’s boring as fuck, you might as well be inside a huge contraceptive!”