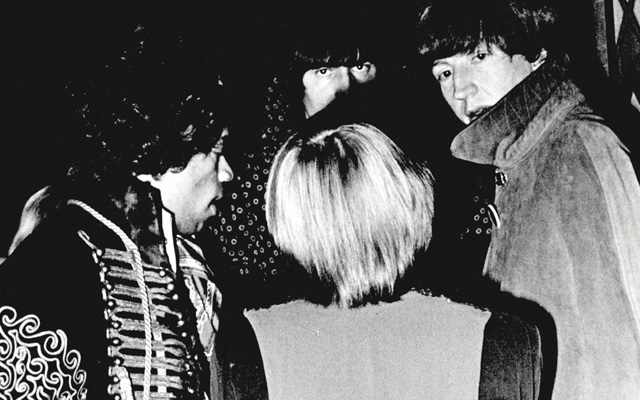 Allen first caused a stir in the early 1960s when he wound up in Canterbury, England, an aspiring 21-year-old poet tripping on beatnik logic and jazz. He had left his hometown of Melbourne behind as soon as he found the means, and is quick to point out that there was no love lost between him and the country of his birth. “Australia was probably ten times more redneck than the most redneck place in America!” Moving into a house owned by Robert Wyatt’s mother, and taking her 14-year-old son under his wing, he virtually kick-started the whole Canterbury scene, which spawned acts such as the Allen-formed Soft Machine and Caravan.

“I was just out of an English private school, and suddenly I encountered this exotic person who said, ‘Fuck this, fuck that, smoke pot, read this’ – he actually had something to say, he actually had a viewpoint.” – Soft Machine’s Kevin Ayers on Daevid Allen

Soft Machine singer Kevin Ayers described the seminal impact of Allen’s arrival in the UK to the Perfect Sound Forever webzine a few years ago – “I was just out of an English private school, and suddenly I encountered this exotic person who said, ‘Fuck this, fuck that, smoke pot, read this’ – he actually had something to say, he actually had a viewpoint. All these people who had just come out of school were sort of wandering around in the job market thinking, ‘what do I do now?’ – suddenly, Daevid Allen’s going, ‘smoke pot now, peace, love and fuck your neighbour’.” Before too long Allen was booted out of his adopted home for being a bad influence, mainly for inadvertently encouraging Wyatt to commit suicide. “Robert thought he’d peaked as an artist and that he was virtually at the end of his life at 15,” says Allen. “I was arguing the other way for two and half nights and then I said ‘fuck it, if you’re going to go and do it, do it then’!” Wyatt was consequently discovered zonked out in Allen’s room by a pile of jazz records having consumed too many sleeping pills.

Moving to Paris a few months later, Allen learned about tape-loops and drones from the mercurial minimalist composer and fellow Herald Tribune salesman, Terry Riley, and was hired by William Burroughs to improvise music for a theatrical performance of The Ticket That Exploded. Adopting a gruff Burroughs impersonation, Allen recalls his meeting with the legendary beat writer, “‘You can have it one of two ways… the first way takes ten minutes, the second way takes rest of your life…’ I said ‘rest of my life, Bill’ and he was cool with that!” As he finishes the anecdote, Allen suddenly pauses, glances over his shoulder and turns to me, smiling mischievously. “I’d like to get a recording of that laugh, do you hear it?” he asks breathlessly. A few seconds pass and a rattling, phlegm-coated belly laugh resounds around the room. “I’d like to use that on a record sometime,” he explains, sending me away with mini-disc recorder in hand. “I’m always hearing things I want to use,” he concedes, giving my clandestine field recording the thumbs up before lurching his narrative back to 1966 and a description of his “epiphanic” and life-changing “seed vision”.

While staying at the writer Robert Graves’s house in Deiàà, Majorca, he dropped acid and saw his entire life mapped out before him (a tale vividly recounted in Allen’s autobiography, Gong Dreaming 1). Within hours, a millionaire cowboy spectacle dealer from Oklahoma had stumped up the cash to form Soft Machine. To this day Allen claims all but one of his visions have been realised, though he’s keen to stress that drugs don’t control his art, “It’s a bit like going to the pyramids for a tourist trip for four hours, including a ride on a camel – a cheap version. But you want to go there and commune, you want to avoid the guides – dope is a great route to discovery, but you’ve got to use your own energy to chase it up!”

His Soft Machine career sparked a friendship with Jimi Hendrix and saw him ride the zeitgeist at landmark counter-cultural venues like UFO and Speakeasy, but it wasn’t to last. After returning from a brief tour of France – where they rocked parties for Brigitte Bardot and were hailed as rock’n’roll genii – Allen was refused re-admission to the UK on the grounds of an expired visa. With little to get by on except the beginnings of something like notoriety, he accepted his lot and moved on with customary, beatific fatalism and fearlessness.