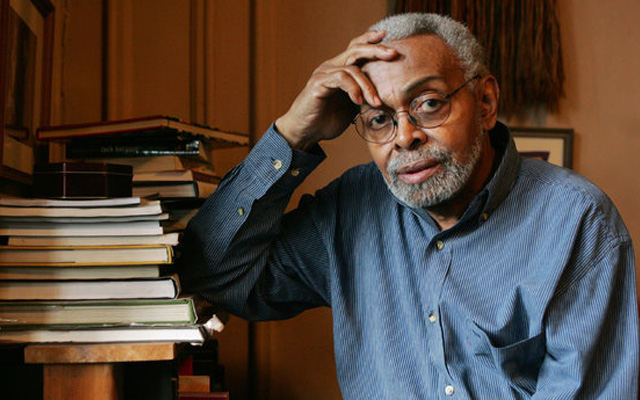 “I always liked jazz,” Baraka says. “And my people liked the old blues, race records and the doo-wop and all that. But when I went to Howard, the great Sterling Brown was a great influence on many of us. A.B. Spellman and I, Toni Morrison … a lot of us sat up under Brown. And so, you can always tell that influence. “We thought we knew so much about jazz. [Brown] said, ‘Why don’t you come on by my house, I’ll show you some things.’ We went by there, and he had the whole wall full of records, by chronology and genre, and he said to me, ‘That’s your history.’ So it took me a decade to find that those records told a story: Every voice, every title is telling you the story of Afro-American history. I really latched on to that idea. And I went back and started listening to the blues.”

“[Professor Brown] knew the music very well — particularly the great heroic bands like [Duke] Ellington, [Don] Redman, [Jimmie] Lunceford and [Count] Basie, and so forth,” Spellman says. “And he was always very insistent that we know the music of the founders, and to know why their music endures, and what made that music. He was a terrific mind: a person with a good, clear and solidly based intellect.”

Inspired by Brown, Baraka’s Blues People spoke forcefully about the art black people produced — and the pain they endured in this country — and was well-received by black and white critics. Langston Hughes hailed it as “a must for all who would more knowledgeably appreciate and better comprehend America’s most popular music.”
Not everyone was convinced. In his 1964 book of essays Shadow and Act, novelist Ralph Ellison wrote that “[t]he tremendous burden of sociology, which Jones would place upon this body of music, is enough to give even the blues the blues.”

“He put my book down in his book,” Baraka says, still stinging from Ellison’s criticism five decades later. “I came with a sociological analysis of the blues that he didn’t want to accept. He had a romantic kind of conception: The blues is just music that comes out of… But I was trying to find out why. [Sterling] Brown said if you study the actual music and the lyrics, they’re talking about their lives. What do you think they’re talking about? Some fantasy world? They’re talking about their lives in America. And for Ralph not to understand that I think was a fundamental flaw in his understanding.”

Today’s scholars might take issue with the exact nature of Baraka’s argument. Ingrid Monson’s paper points out the author’s “tendency toward social determinism [that] is particularly obvious in Baraka’s discussion of class — which, to me, is where his argument is most undermined by essentialism. Here, middle-classness is the ultimate marker of cultural inauthenticity, because the black middle class, according to Baraka, dedicated itself to assimilation.”

Blues People outlined a black experience in sound, and it marked the beginning of LeRoi Jones’ social and personal metamorphosis. His drama and fiction works grew increasingly centered on African-American themes. He moved from Manhattan’s Lower East Side to predominantly black Harlem. He founded the Black Arts Repertory Theatre and School in 1965 and, along with poet and critic Larry Neal, kick-started the Black Arts movement — a cultural arm of the Black Power movement. And, in 1968, Jones changed his name to Imamu Ameer Baraka, and later dropped Imamu (meaning “spiritual leader”) and changed Ameer to Amiri. He would later move from Harlem back to his hometown of Newark, participate in the 1972 National Black Political Convention in Gary, Ind., and reject the narrow confines of cultural nationalism for Marxist-Leninist doctrines.

From the ’70s to today, Baraka remains prolific, and has written an autobiography, essays and poetry. He’s continued to publish books about music. But by far, Blues People remains his most influential work about music.

“You’d be hard-pressed to think about who has not been influenced by that book — anyone from Sterling Stuckey to Samuel Floyd, Ingrid Monson, Scott DeVeaux and myself,” Guthrie Ramsey says, listing fellow scholars. “That book created a space in what I call the literary community theatre for all kinds of ruminations on black music.” For Ingrid Monson, “[t]he speculative history of African-American music that [Baraka] presented in Blues People in 1963 successfully articulated a number of crucial issues that foreshadow recent work in cultural studies, post-structuralism, anthropology and ethnomusicology.”

A.B. Spellman says a 2013 version of Blues People would naturally be different, but the focus on black experiences would remain. “A young writer trying to do a comprehensive book on African-American serious music would want to have a clear look at the sociopolitical environment of the music today,” Spellman says. “It’s a different one from the environment Blues People was written in, but no less exploitative; no less cynical, and it needs a different analysis. And you’d want to have a sense of pride, because African-American music has affected the culture of the world, and continues to do so. I would not attempt to be neutral.”

As for the author, Baraka himself notes with satisfaction that the music and culture of “blues people” enjoys a wider influence in the 21st century than it did in 1963. “My own thinking has evolved,” Baraka says. “You find Africanisms in American speech. You find an African influence on United States culture. There are all kinds of Africanisms in America, as you would expect, if you really thought about it. … That whole thing is much broader; the influence is much broader than I first understood.”