To begin to appreciate – and later to understand – the book Jazzing: New York City’s Unseen Scene by Thomas H. Greenland you have first to accept that the title is the present continuous form of the verb to jazz; at least Mr Greenland would have us understand that is the case. I must accept this hypothesis – even if it (the coining and usage of the word) might not be or have been the author’s intention firstly because it makes the book, I dare say, enjoyable as well as for the purpose of recommending this book to readers who might not otherwise pick it up much less read it. For myself, I prefer to use the word “Jazz”, which I deliberately capitalise, as a proper noun. It gives me a particular satisfaction to change the linguistic status of the word because I find it not only best describes the musical style (as in its conjuring images of both cerebral and spiritual activity going on in the improvising musicians’ heads), but also because it also becomes an experience of the act of the music itself.

Why do I labour so much about what figure of speech to align with? I believe that it is the key to bringing the visceral experience of Jazz to the listener of this music, and to the reader of this book. It seems to me that erring on the side of Confucius would be not simply expedient, but wholly appropriate. This, of course, has reference to Ezra Pound’s “magnificent rededication” of Confucius in his (Mr. Pound’s) own art specifically in his epic work The Cantos. A discussion of Mr. Pound would seem outside the purview of this piece, thus suffice it to speak of his use of the two Confucian doctrines of zheng ming (鄭明) and cheng yi (成義) in the formulation of his (Mr. Pound’s) new theory of language. The theory holds that language is not an a priori given predating human existence but rather a nominative act, 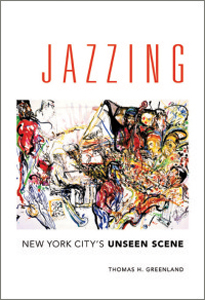 the primal performance of the creative intelligence by which human beings prescribe the actuality of things, determine existential conditions and demarcate the distinctions in sociopolitical relations. At the core of Mr. Pound’s theory of language is a belief that poetry, at its most authentic, represents the highest degree of linguistic precision, in which lies the hope of a redeemed language.

Now apply that to Jazz: what it says or how it speaks and sings (its language) and what it stands for (its politics) and what that means to “New York City’s Unseen Scene” and you have the makings of a book, which in Mr. Greenland’s hands becomes Jazzing: New York City’s Unseen Scene. Further, to the extent that it is the responsibility of human beings to maintain the utmost possible functionality of language, or linguistic precision, as Mr. Pound called it, in order to fulfil the universal human wish for intellectual progress, moral perfection and social stability. It is possible to experience Mr. Greenland’s book both as a metaphor and as a micro-organism of what the (macro-organism) of “Jazzing” really is in today’s universe, no matter where you might exist, geographically speaking, that is. And so, in that this book provides an important document of the New York City scene it is in a sense also a palimpsest for the “scenes” in, say Chicago, New Orleans, and San Francisco and so on. But apparently this is not all that Mr. Greenland seeks do in the writing this book.

Very early on in his introduction, for instance, the author suggests – and rightfully so – that audiences of fans, critics, impresarios, club owners, etc., have much to contribute in the way of – if not being entirely responsible for the intricacies of the “composition” or, more precisely, the work being performed – then at least a factor in its fine-tuning or a part of the finishing touch. Here the book does not always live up to its promise. It “riffs” upon this “theme” occasionally and although it makes a start to do so in chapter 2 – “Developing “Big Ears”: Jazz Fans” it loses its way when it resorts willy-nilly in discussions about the proclivities of a specific Jazz club owner, or a musician who decides to open his own venue because of differences he or she has had with (other) owners who once presented his or her work. The discussion of how John Zorn came to found The Stone is a case in point. The book loses its way more inextricably in discussions about type of Jazz “old-fashioned” and “revolutionary”, “avant-garde” and so on. Admittedly this is a question of fine balance; of how to ride the see-saw world of making music and presenting it. Or performing and curating, the latter of which is often dangerously affected by politics and personal preferences, which is the theme of John Zorn’s episode with the founding of The Stone in the first place.

What Mr. Greenland’s book does do well is give the audience – listeners, fans and critics – alike a serious voice in the element of improvisation, which, in the case of Jazz, is the key to its existence. In language that is quite visceral at times, Mr. Greenland transcribes listeners’ experiences. His vivid analysis of Jonathan Daniel’s experiencing of the music and its re-location to visual art is quite exciting and merits re-reading. Large swathes of “Interactive Listeners: Audience Agency” are also worth a second and a third look and here Mr. Greenland certainly captures as he puts it: “The ephemeral and extemporaneous nature of jazz” making it, by his own admission, “an ideal catalyst for interactivity between artists and audiences”. To the extent that as the author of the book Mr. Greenland qualifies as the “artist” as do I and readers like me, as his “audience” participating “as witnesses to unfolding musical events” so to speak, this book becomes well worth interacting with and becoming a part of the experience of its subject, i.e., Jazzing.