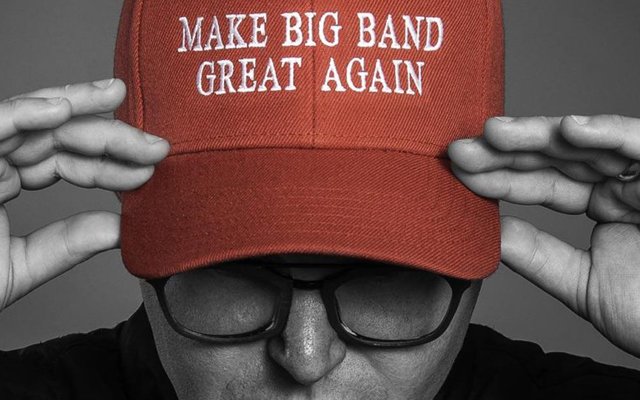 Elliot Deutsch is not a name that comes easily to mind when you think of music. But to insiders – the creators, arrangers, performers, producers and so on – it’s quite another story. His name ranks fairly high – some would say on the top tier – of the whole business of music. A horn-player, composer and arranger with a vivid style who creates an almost tactile tonal palette his musicianship is in constant demand. He has worked with the likes of Cheryl Bentyne, Take 6, Arturo Sandoval and Sasha’s Bloc as well as fronts a big band of his own. 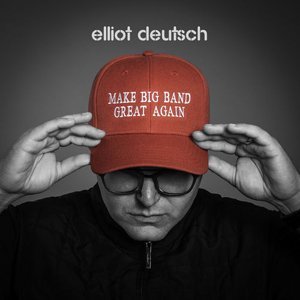 His positively rambunctious music was recently featured on an EP that was appropriately entitled in the spirit of the troubled times – tongue firmly in cheek – Making Big Band Great Again. But lest there be any misunderstanding, he is anything but supportive of the denizens of the MAGA tribe. On the contrary, he is angry and, to use his words, “bemused by the political climate” in the USA. Angry enough to create five charts informed by dark, menacing music that also takes a strategic timeout every once and a while to feature a soloist who will punctuate the ominous musical narrative with a bright solo redolent of that flashing beacon that says immediately that all is never lost, and that as long as there is music hope springs eternal.

Mr Deutsch is not shy of making his presence felt either. He chooses his favourite medium to make his voice heard: the big band. And in a manner that is forthright, and with the visceral energy that he displays in spades, Mr Deutsch presents his take on America through music that is loud and kinetic as an army that marches ever onwards cutting a broad swathe through the soundscape and takes no prisoners through beautifully-crafted arrangements of beguiling variety and sensuousness. Also, being particularly vocal about how he feels about “these troubled times”, Mr Deutsch spoke at length about his raison d’être for each of the five charts eloquently and firm in the knowledge that he is doing his bit to “make the big band great again” as he speaks to us about the recently-released musical project.

JazzDaGama: I know that the hat on the cover was a bit of a giveaway, but really, what was the impetus for doing this short album?

Elliot Deutsch: I wanted to express my anger and bemusement with the political climate through my medium (big band jazz). Fans of my ensemble are familiar with what I have termed “programmatic big band composition” – instrumental pieces that tell a story through their narrative. My previous CD had a song titled “50 Piece McChow Down” that humorously tells the story of the experience of trying to eat the notoriously huge 50-piece nugget meal.

Make Big Band Great Again is the first time I have applied this compositional style to something with a bit more substance.

When I decided that it was time to write music for what would become my third album, I knew that I wanted to write music with an (appropriate) theme or topic. It is important that an album has cohesion beyond the implicit fact that the same person (I) wrote all of the selections. The topic had to both resonate with me, and it had to be deep enough to stay interesting and relevant through several compositions.

I wrote all four of the pieces in 2017, starting with “Fake News”. In California (I can only speak for my own experience), it seemed impossible that Donald Trump would win the general election. My own struggle to understand the political situation led me to choose it as the theme for the record.