Music And Coexistence: A Journey Across the World in Search of Musicians Making a Difference

Anyone expecting this to be a book about Bob Geldof or about Bono are in for a surprise, not only this is not a book about celebrity musicians who care and give a great deal, but because none of the musicians written about in this fine book by Osseily Hanna are well-known at all. In fact as you might expect, none of the protagonists have been heard about at all. But in the four parts and twelve chapters of this Music and Coexistence you come across some of the most remarkable musicians in corners of the world that you might never have guessed possible who are fighting against seemingly insurmountable obstacles not to have their voices heard but to spread the word about peaceful and coexistent harmony in places such as Turkey, the Shufat Refugee Camp in Palestine, South Africa, Tanzania, Mexico, Ireland, Kosovo, Rwanda, Cambodia, Israel, Brazil and the United States of America – regions torn apart by strife, bigotry, violence, genocide and a lot more things that are absolutely abominable and offensive. 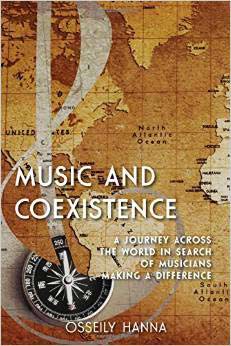 It is fashionable to say the “politics” and be done with because that’s exactly what most of us tend to say and move on as if nothing happened. But in the regions which Mr. Hanna has visited you see nothing of this. Everything matters, whether it is the stigma of being albino in Tanzania, Palestinian in Gaza or Arab in Israel, or Jewish in Israel, black in a South African township, a woman in Oaxacan, Mexico, a reformed drug-addict in a favela in Brazil, marginalised in Turkey… or any of the places that Osseily Hanna visited the power of music resonates in the most unlikely lives. Some of the stories – all real and compelling – take place in unlikely circumstances and unlikely places, such as in a fishing village in Cambodia or in public places in Israel and Palestine. The narratives are stark, even heartbreaking. It is the very nature of the storyline that makes the blood flow faster and hotter; that puts a twist in the guts and – if you are not socially-conscious – question your ability for caring for the wretched of the earth. To be clear this not a leftist manifesto but is a documentary; even a docu-drama in four parts. I merely find the metaphor used by the great Frantz Fanon to be appropriate as what the book unveils is as shocking as modern slavery, genocide and more. 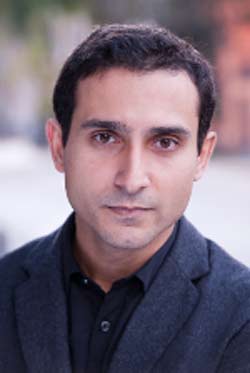 The book is part of a journey that Osseily Hanna, an English banker/investor and musician who grew tired of the corporate world of capitalist society and decided to pursue a journey in search of music that was used to make a difference to the least privileged members of our society. In a sense it is a documentary but it is a powerful and compelling one. It exists, Mr. Hanna tells us, as a book as well as a film. The book is compelling because it is written in a deceptively idiomatic manner. Mr. Hanna writes like a sleuth at times especially when he is in dangerous places such as Palestine, Tanzania and South Africa and Mexico. His writing cuts deep, emotionally. You do not reach for Kleenex, but your tongue turns dry and you get an uncomfortable feeling in the pit of your stomach when you, read, for instance, the story Tito, an albino musician in Tanzania, whose work as a committed musician trying to effect change for people like him at great risk to his own life. Tanzania, we discover, has a deep-seated and wholly implausible hatred for albinos. Shamans and witch-doctors and their questionable (at times) practices are all-too real.

Moreover, Osseily Hanna writes without prejudice. By this I mean, he had no preconceived notions and absolutely no preconceptions about what he was setting out to do. All he did, it seems was pack a small suitcase, a still and video camera and an ever-increasing amount of notebooks and, of course a laptop, where he documented his remarkable journey. Comparisons are odious and I am on a dare to myself, compare this book with G.I. Gurdieff’s Meetings With Remarkable Men. In Mr. Gurdieff’s book the “remarkable men” are so-called elders who have acquired the erudition and the gravitas of sages. In Mr. Hanna’s book (and film) the remarkable men are mostly youth who have the erudition of old souls. 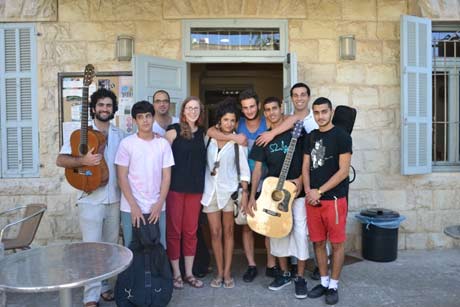 Their (Mr. Hanna’s subjects) wisdom is uncommon, often surprisingly so and yet something that you would never associate even in the most diverse circumstances. For instance, you will not only be captivated by the two rappers Fadi Ammous and Muhammad Mughrabi both extraordinarily brave young men who are cut from the old cloth that produced such great men as Gil Scott-Heron, the Last Poets and other poet/rappers of another generation. The same will happen to you when you encounter Flavio Pimenta in the Samba School in São Paulo, or Arn Chorn-Pond, a Khmer who has left his adopted home in the US to return to his birth-home and who now travels in a bus spreading music and social consciousness. How unlike the Magical Mystery Tour of some people we know and love this is.

I am saddened by the fact that a DVD of Osseily Hanna’s travels, was not appended with this fine volume. That would have been the proverbial cherry on the cake. And judging by the narrative of the book would have been a fine work of art as well. It is hoped that this will happen someday. I am sure that editing and post production is an expensive affair and it appears that Mr. Hanna had no one with deep pockets or some bottomless source of funding to make this possible. Still, one can only hope… Till then, I suppose we will have to make do with the photographs in the book and Mr. Hanna’s commentaries. IMDB does list “a” documentary, but when you are led to Mr. Hanna’s website there is no sign of a DVD or of sources where the film may be viewed. What a pity. Upon reading the book, the film can only be as remarkable.

I should end – de rigeur – with a quote from the book that appears to sum up what the music of coexistence is. Perhaps that “coexistence” is too narrow a term, even for such a book. The quote comes from (chapter 5, page 62) and from Caryl Phillips, a truly incredible individual who was once interviewed on BBC’s Talking Books by Raiza Iqbal. Mr. Hanna caught up with Mr. Phillips ostensibly about his impending travels and here is what Mr. Phillips told him (I present the quote in full for it is worth every word spoken):

“Language is important because it conveys meaning, but it isn’t the sole vehicle of communication in music. Language in a novel or language in a book of nonfiction is everything: if you don’t understand the language, you’re getting nothing out of that book. You’re walking around with two pieces of cardboard and 300 pages of paper inside that may as well be blank if you don’t speak the language, but I can have a CD by a musician from Brazil and I don’t speak Portuguese, and the CD means something to me. I can have a CD by a musician from Sweden, or of a musician in Pakistan. I don’t speak Urdu, I don’t speak Swedish, but I’m getting something from the music. Would it help me if I knew what they were saying? Perhaps, but I’m still getting something from it”