Home Books & Miscellany Of Stars and Strings: A Biography of Sonny Greenwich by Mark Miller

Mark Miller – Of Stars and Strings: A Biography of Sonny Greenwich

The great Ezra Pound, always forthcoming with advice – often unsolicited – to writers and poets aspiring to “make it new” once advised that when approaching an artist his best advice was [and I believe I paraphrase somewhat] to “go directly to the work” before approaching a biography. I believe that what provoked this rather stern missive was the fact that the works themselves almost always told you more about the artist and his art than any biography could with any degree of truth and substance. In the case of some of Canada’s finest musicians – especially contemporary ones – both music and certainly biographies are hard to come by. In the case of music, when you do happen to find something it is usually reasonably well-produced. You might not always be able to say the same about biographies. Nevertheless, it may be easy to be guided by Mr Pound for reasons of quality rather than anything else. This is certainly the case with musicians such as drummer Claude Ranger and composer and guitarist Sonny Greenwich.

Mark Miller’s eleventh and twelfth books were biographies of both musicians respectively. Both artists deserved much by way of recorded work, and yet both have left us wanting much more. In the case of Mr Ranger, he stopped performing rather early and then disappeared from the face of the earth. The case of Sonny Greenwich is infinitely more complex. Although the guitarist has performed fairly regularly – albeit with long breaks in between – since the late 1950’s at least, his recorded output remains sparse by comparison. Mr Greenwich also suffered the effects of ill-health for much of his life and therefore rarely travelled to the US [or anywhere else]. Trouble with his lungs and the effects of seizures meant he could not fly from performances in the US, for instance; something that would have enhanced his burgeoning reputation at a time when the art of music had considerably more value than the commerce of it. Thus, Mr Greenwich acquired something of a mythic status among both musicians and listeners thanks in part to those who had played with him and spread the word, and thanks also to the fact that his recordings were also relatively few and far between. 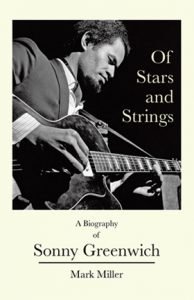 Mr Greenwich is now in his 85th year. While he is not known to have withdrawn from music [again], he performs and records little to nothing today. Yet he remains a powerful force, for no other reason than the fact that his musical conceptions and the sheer rumour of the intensity of his sound both continue to dominate the landscape of modern music, wherever music may be played. This is not hyperbole although it may have more equity where music is taken more seriously for its art than for its commerce. Mr Miller is nothing if not the epitome of accuracy, down to the last detail even in the discography at the end of the book, which cites – correctly – that his last recording under his own name so far, is Special Angel [CBC, 2002] with Marilyn Lerner, despite the fact that Kleo Records has listed two releases: Portraits and Essence, as being from 2009. The records were, however, made in 1996 and 1999 respectively. Besides there are rumoured to be scores of unreleased recordings lurking in several vaults which are just as likely to remain buried forever as they are to see the light of day at some point in the future. No matter what, Sonny Greenwich has long-since deserved a book. How elusive a subject he has been and remains is something that Mr Miller’s biography Of Stars and Strings sought to discover.

Mr Miller is – like the subjects of his work – in the very top tier of writers and biographers. What sets him apart from his peers is the manner in which his books are crafted. He never misses a detail, explores every single one of those details that are relevant to the story he is telling and then proceeds to unpack each [detail] with precision and a wonderful turn of phrase. Best of all his understanding of music is deep. But more than that, he has obviously always “listened” with large, open ears and so delves into the character of the sound that exemplifies the musician’s voice. His “reading of the artistic works in question” is always inspired – and inspiring. As biographers of Canadians go he is at a certain advantage, having written for over forty years about Canadian music, twenty-five of which he spent writing for The Globe and Mail one of Canada’s best loved newspapers; this at a time when Canadian newspapers employed critics of his stature.

But best of all Mr Miller zeros in to the heart of what sets his subjects apart and then “paints” his singular portrait with depth of musical knowledge. The subject of this book, however, presents unique challenges for one reason – and one reason alone – setting up a “problem” for Mr Miller which is not of his making at all. Firstly, although Mr Greenwich appears to have given interviews [or at least talked to critics and journalists] he appears to be somewhat terse in his remarks, often coming across as rather stiff-necked – understandably so for like most musicians he probably would have liked his music to do the proverbial talking rather than the other way around. However, that would have proven to be a somewhat difficult to say the least. Simply put Mr Greenwich’s music itself is difficult to categorise not only because categories themselves are almost despicably redundant in music [Mr Pound’s words echo loudly at this stage – uncomfortably so…], but because Mr Greenwich’s music is like shifting sands; just when you think you’ve come to terms with it, the music seems to go in a different direction, pulling you along – as great artists and their art does – with an irresistible force.

While this book does not attempt to put Mr Greenwich in a particular niche, it does use conventional wisdom to approach an approximation of where he and his music can find a modicum of definition. Mr Miller does not often fall into the trap that lures most critics who write about music that owes itself to the African-American [in this case, African-Canadian] milieu, but he strays often enough into this territory for it to become distracting at times. Along the way the reader might be frustrated by words like “post-Bop” and “avant-garde”, but fear not for these are not terms of Mr Miller’s making. Most ties that Mr Miller uses them are because he must give historical context to how Mr Greenwich was being described by the clubs that employed him to perform. The words themselves have been coined by the “suits” who decided – back in the day – how Mr Greenwich would be “billed” and by the record labels that were [and often still are] – let’s say – less than musically “educated”. They are also the terms that our ears have become accustomed to hearing on the radio, largely because presenters were – and are – too lazy to care about detail and/or not competent enough to even understand the music, the epistle of which they have been tasked with spreading. So, whether musicians like it or not they are described in the terms that we see above – on air, in performances and in record-store bins [which still exist, probably in an alternate universe] and now online.