Miles Davis, not known for his modesty, once explained to his biographer, Quincy Troupe, why he disliked being referred to as a “legend”. “Legends…” he famously said, “They’re all dead motherfuckers.” However (Davis’) poignant refusal to accept high praise may not be lost on the subject of this book, Claude Ranger Canadian Jazz Legend and to the extent that there is no proof that Claude Ranger is dead, we might be somewhat wrong in taking umbrage to that word in this title. Moreover, upon reflection and on the recorded musical evidence, albeit sparse as it is there is a good case for Ranger being referred to as a “legend”. So let’s grant him that even if it’s only for this extraordinary biography, Claude Ranger Canadian Jazz Legend. As non-fiction books go, its vivid narrative makes the account more like a biopic by Mark Miller; not only an account of a tragic life lived, but a visceral resurrection of the manner in which Claude Ranger played – no, dominated – his instrument bestriding it, from bass drum to elevated ride cymbal, like a Colossus for the thirty-five years that he was active in Canada, the United States, Europe and Australia.

Mark Miller’s task could hardly have been an easy one, despite the fact that he had been making front-line dispatches from the field of music for decades. Writing about an artist – especially one as enigmatic as Claude Ranger never is. The drummer is, in the words used of Raymond Gervais the Montréal artist and essayist, “an enigma bordering on fiction” and we are warned of this very fact in Miller’s brief introduction itself. So, in a sense we are prepared for mystery and the intrigue that might be the natural brief of one living by the skin of his teeth in a world hostile to artists. We are talking of post-war Canada which is already a country living in the giant shadow cast by its southern neighbour that touts itself as the cradle of Jazz. Moreover, hockey-mad Canada in general and Québec in particular seems hardly the kind of place that will be kind to an artist and that too, 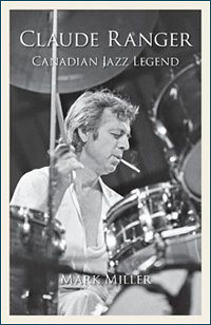 one of such an exalted genius as Claude Ranger’s. Add to that the fact that even without the pimps and pushers seemingly de rigueur in the world of Jazz, Ranger clearly already dealing with the apathy of musical pseudo-cognoscenti is also- we find – battling mental illness: the dreaded effects of, among other things, bipolar disease.

If all of this shaped his character, Mark Miller brings it to life with kind of skill that Sir Arthur Conan Doyle uses to conjure his Sherlock Holmes to life. In keeping with the times I might add that Miller re-creates Claude Ranger in a kind of blue hologram that as often as he is on song, also flickers and vanishes into thin air almost as soon as the sound of his music fades into oblivion at the end of its audible life, as it were. In the interim, however, we have extraordinary prose that brings music – specifically the music of Claude Ranger – to life thus: “Ranger, very much in his element, responded in kind, his small drums tuned tight – hard, unyielding surfaces sharply struck – and his cymbals brash. He swung fiercely or not at all, playing tension against release with crescendos that exploded in a clatter of sound, as though his drum set had collapsed beneath him with a shudder and a crash.” In the prose, of Claude Ranger Canadian Jazz Legend complete with audio-visual imagery, this particular performance along with its architect, Claude Ranger himself, rises to eminence. There are many other such instances of elegance in Mark Miller’s prose and these dapple the book like sunlight rippling upon its pages.

Indeed Mark Miller has crafted his portrait of Claude Ranger as a sculptor would his inanimate block of stone or marble, and like the best of the breed he brings the drummer to life, warts and all. This is not 280 pages of fleeting glimpses. It is a sustained exposition of a life lived in the cold and (relatively) unfeeling world of the artist. Here, too Miller drops – to use the drummers’ terminology – ‘bombs’ of his own in the way of quotes from critics. Perhaps this is Miller making amends and restitution to Ranger on behalf of our tribe, and even if the writers in question were being accurate about a “poor” Ranger performance, they still seem insensitive; at times even downright ignorant. Miller, for his part, tempers this criticism with a kind of profound honesty that can only come from a writer with an ear acutely tuned to history. To that extent his sympathetic accounts of Claude Ranger’s finest hours (and there were many in his short span of activity) with Michel Donato, Brain Barley, Don Thompson, Sonny Greenwich, Lenny Breau, Moe Koffman, Jane Bunnett, Phil Dwyer, Dewey Redman, Don Pullen, Sonny Rollins and – by all accounts – the almost mythical dates with Charlie Haden. Much is also said – and made of Ranger’s impact on the younger generation of musicians – drummers such as Dylan van der Schyff, in particular.

There is another important reason for the importance of this book and this is true of everything that Mark Miller has ever written: it is unabashedly “Canadian”. The “value” increases exponentially when we consider that Miller has been, and continues to be in his way, a witness to the history of music in Canada. It bears remembering that we are an unassuming people, diffident about our artistry (among other sterling characteristics). Mark Miller has been on hand to record and glorify its unfolding in every instance, pulling no punches, I might add, yet still generous to a fault. No one needs this more than Claude Ranger, certainly as he seems to have vanished into the mist at the mercy of the vagaries of his “Claude-ness” and his bipolar condition. You will therefore be forgiven if you feel distraught, even tearful, after Mark Miller, having wound the elastic band of his book to an unbearable tension, closes with this: “The first days of November, overcast and cool, found Ranger once more in distress. His response to situations that were beyond bearing had always been to walk away. And so it was again.”