Home Books & Miscellany Lilian Terry: On and Off the Record with Dizzy, Duke, Brother Ray...
With Horace Silver, Miss Terry reveals a deeply introspective man and profound thinker. Mr. Silver was – and this might seem surprising to some – a dedicated vegetarian. On the face of it this might not have much of a bearing on Jazz. However, in the context of Mr. Silver’s music such as that on Serenade to a Soul Sister, which reveals his deeply spiritual nature and, toward the end of that chapter, the significance of the pianist’s own imprint Emerald Records. Miss Terry also draws the relatively shy Horace Silver into a deeply meaningful discussion on religion. Miss Terry is equally masterful while probing Bill Evans on his quiet relationship with music.

Drawing out her subjects is something Lilian Terry is very good at. She does a wonderful job of poking the notoriously slippery Duke Ellington and getting him to reveal his own spiritual ideals and thoughts about religion, not to mention his own songs and where they came from. In the case of Max Roach, Miss Terry is gentle yet firm as she pins down the drummer in discussions about Black power 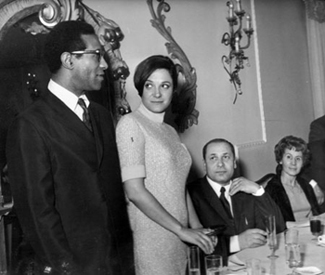 that achieved the greatest prominence in music under his watch, while her incredible empathy for Abbey Lincoln who was deeply saddened by her separation from Max Roach.

Miss Terry’s accounts of steer the notoriously flirtatious Duke Ellington are elegantly humorous. And it is extraordinary to find how Ray Charles, often – and now we know, wrongly – portrayed as more than flirtatious, conducts him with extraordinarily gentlemanliness. But the most revealing and longest chapter in the book comes at the end and it is one that describes Miss Terry’s long and eventful relationship with Dizzy Gillespie. It is not only an intimate portrait of one of the most iconic figures in all of music, but a record of how his music affected his fans.

Lilian Terry’s account of life with Dizzy Gillespie is luminous also because she had a musical relationship with him, recording Oo-shoo-be-doo-be, a significant Jazz album in Milano. Dizzy Gillespie also enabled Miss Terry to fulfill her dream to found an institution, The “Dizzy Gillespie” Popular School of Music, which was founded in Bassano del Grappa, Italy in 1983, to keep youth off the streets and which was significantly expanded in 1987 to include non-seeing children. Clearly, Dizzy Gillespie was more than just a subject for an interview, or even a series of interviews.

But this is the case with all of the seven icons are the pillars that hold up the entire edifice of the book. But each is erected on more than just excellent reportage. Each is deeply-thought about, where each unguarded moment is brilliantly captured and described so vividly that often – especially in Miss Terry’s description of Abbey Lincoln’s sad divorce from Max Roach – we feel as if we ourselves are right there in the room with them.

In this regard the book is a wonderful addition to a library that must also certainly consist of Les musiciens de jazz et leurs trois vœux written between 1960 and 1966 by Pannonica de Koenigswarter, (Buchet Chastel, 2006), later published in its English translation Three Wishes – An Intimate Look at Jazz Greats (Abrams Image, 2008) and Born Under the Sign of Jazz by Randi Hultin (Sanctuary, 2000). Yes, Dizzy, Duke, Brother Ray and Friends by Lilian Terry is that good. But Miss Terry’s is unique because she is also a Jazz singer who famously fell in love with Johnny Hodges’ “Star-Crossed Lovers” virtually starting her on the quest to find Johnny Hodges with Duke Ellington, Jazz in general and to even sing her tribute to the great alto saxophonist whenever she has the opportunity.