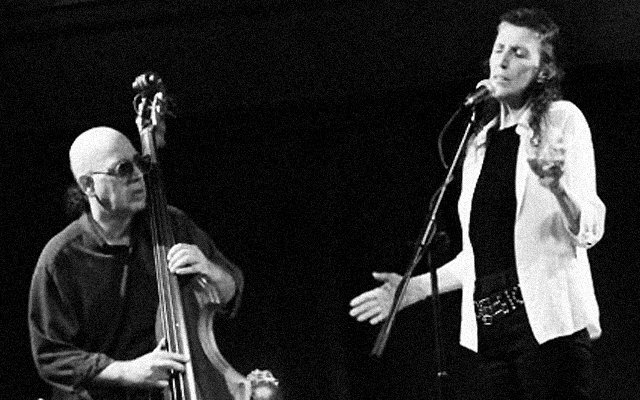 The poet is the most conspiratorial of artists. No other artist is privileged to enter another person’s mind so invisibly. Poems need nothing but themselves to make themselves felt; no wall to hand on, no stage or screen. Spoken or read, poems require merely our confidence to receive them. The unique pleasure of poetry is an unencumbered transmitting of one mind’s experience to another.

Among the handful of poets – published and/or performing today – one mind that thrills is the one inside Jane Grenier’s brain. Communicating directly with the nerve endings of her hands Miss Grenier’s poetry shocks and thrills – once again – in Word Against the Machine, her new collection of poetry that appears in a slim volume with artfully creative line drawings by her husband and contrabassist Albey Balgochian.

I had said earlier that a poem needs no accompaniment to transmit its message. But Miss Grenier’s work on the complementary CD – like those of the poets of Jazz, the Beats and Rappers; The Last Poets, Gil Scott-Heron and others – does, in fact come with accompaniment. In Miss Grenier’s case this takes the form of Mr Balgochian’s contrabass. And if the words of Miss Grenier’s poetry were not tough enough (which they most certainly are), Mr Balgochian’s moaning, groaning and rumbling contrabass adds double the gut-punch to their rage. 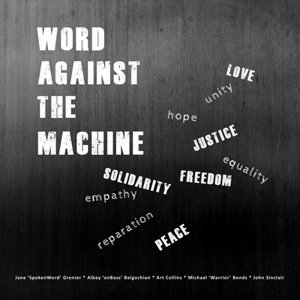 Words Against the Machine comes after Miss Grenier’s and Mr Balgochian’s earlier work, Tragically Hip (2012). When the 2012 book was published credit was given to the artists who then called themselves Zen Beatz. The word, “Zen”, of course, comes from the Chinese 禪 (Chán), which traces its roots to the Indian practice of dhyāna (or “meditation”) from a school of Mahayana Buddhism. The poetry took issue with social anomalies even then as well. But compared to the tone of voice of the poems in that book, the poetry of Words Against the Machine – spoken of read – burns with a raging in the bluest part of a flame.

The rage makes for an urgency not simply to listen, but to act; a call to rise up from apolitical stasis, to voice dissent and join any resistance up to and including (I am assuming, voting Trump and his Republican refusniks out of office). There is no secret that all of that has been brought on by the fascist-politik of the present government in the White House. The rot, as we know it, is so deep that it is being spewed forth in almost every aspect of life today. The artists deal a blow to this from the very cover of the book onwards where the title nestles cheek-by-jowl with words signifying the issues and emotions involved: “love”, “justice”, “solidarity”, “freedom”, “peace” and more.

Still nothing can prepare you for the poetry within that stings the senses like the hot breath of the poet. You don’t have to wait long for that either. Here is Jane Grenier in the first poem in the book:

“Acknowledging the depth of evils perpetrated
by white sheets in the night
A trail of tears, devastation, destruction, slavery,
rape, mutilations, murder, mass incarcerations.
Hatred
Sorrowed by purposely inflicted pain
of one human upon another
I weep at the heartlessness of it all.” (from “Questing”)

Then she decries the power of what she calls “the right-wing moral majority” and “liberated to generate visions”, she proceeds to define her poetic objective with:

“Curving words, staining vowels, dripping metaphors.
Engaged in abstractions
Committed to shine
To Black Lives Matter
To Standing Rock
To Dreamers
To Lovers
To Youth on the march
To Women on the move
To Humanity
To inspire tribal resolution
Where I and he and she and me
and the rest of yous including you and us
become
We” (from “Questing”)

With her stated “quest” and manifesto, Miss Grenier proceeds to tackle hot-button issues and explode the myths and singing against the proverbial joy spring in “Winter has come to America” where she finds that “we have been trumped” and that “Whitey is blindly stumbling through life”… again, she calls the faithful to action, saying that “Silence is Death”.

Miss Grenier writes not with pen to paper, but rather with the raw nerve endings of her fingers. Her poetry is visceral. Eden does not exist, she says in “Righteousness” where “Vengefully severed from the promised garden” she finds herself – and indeed – all of her country “Surrounded by wailing walls of lamentation.” Here too the imagery is stark and even phantasmagorical: “Rising from the volcanic mud of beasts, the “cruel men and mean women” of her poem “prey upon us as their sin eaters feasts”.

The writing, then, is fiercely emotional, but in its imagery, is also redemptive. But the “Time is Now”, she tells us but only if we answer an urgent “yes” to the series of rhetorical questions asks puts to us in that poem. You do have to make a clean break away from the “amerikkkan” society that you have found yourself in though. The consequence, she announces in “Blood on the Track”, will be dire, as: “Precariously perched on insanities edge” we’ll see “Innocence transformed into fists of might.”

On some poems – the ones recited on the accompanying disc – Miss Grenier is joined by slam poets “Michael “Warrior” Bonds, Art Collins and John Sinclair. Together they indulge in ferocious dialogues as they “spit” the poems – “Political Speak-Reparations”, “I can’t get no Saddest Faction” and “I Dance” respectively. The harshest imagery is tempered with brilliant word-play and even humour, albeit a tad dark – and all of it comes as Mr Balgochian rumbles along on his contrabass. The rhythm is often that of a racing heartbeat even as the words are shepherded by a meter that is dangerously free. This and every other poem recited or read is poetry at its finest no matter whether you experience it reading through the poems in the book or performed by artists on the sharpest edge of creativity as Jane Grenier and Albey Balgochian clearly are.

Published independently
No. of Pages – 61
CD runtime – 48:24
Price not indicated