Home Books & Miscellany Fred Hersch: Good Things Happen Slowly
Mr Hersch does not sabotage his career; not in the conventional sense. However, his hardly practices, often refuses to follow instruction and treads a path not taken by an academic-student, but rather as a learner; an acolyte in a Mahayana Buddhist retreat battling the koans – some of his own creation and others of his teachers’. The greatest among them appear to be Jaki Byard and Sophia Rosoff, but there were many others on the road to graduation. Duke Ellington and Charles Mingus, Billy Strayhorn, Art Farmer, Jimmy Rowles, and many others especially Joe Henderson, who gave Mr Hersch probably his greatest lesson one day after they performed together and the pianist approached Mr Henderson to tell him:

“…After a couple of years working together, we had a little downtime backstage at the Vanguard one night, and I finally said to him, “Joe, when I’m laying out behind you and then coming back in, I that’s cool. I mean, you’ve never said anything.”

“He looked at me through his big, thick glasses and said, “If you feel it, it’s right. If you think it, it’s probably not right.

“What an amazing lesson – play what you feel! Work from the inside out. Don’t apply an external idea that could shake you out of the moment and inhibit you. Don’t get into routines. Joe, in his old-school laissez-faire jazz way, had been leaving me to learn that by experience.”

As in music, so also in life. Here it would seem that Thelonious Monk –the musicians probably most beloved of Fred Hersch. Evaluating his relationships – particularly one with Nonesuch Records, Mr Hersch arrives at the music of Mr Monk. This is what he has to say:

“He could work one idea through a tune better than anyone else. His blues “Misterioso” is built entirely of major and minor sixths. “Blue Monk consists of mostly half and whole steps. He used rhythmic and chromatic displacement, turned motives upside down and backward, and it’s said that he spent years perfecting some of his compositions. His angular tunes – with their profound use of space, harmony, rhythm and motivic development – are compositionally tight and always have his musical DNA in them. His music is unceasingly fascinating and inspiring to perform.”

This is why Fred Hersch almost always slips a “Monk tune” into virtually every performance of his. And, also, almost curiously so, Mr Hersch’s narrative of his life seems to play out like a Thelonious Monk tune: his music forming the A section and his life forming the B Section. It all comes together in to endevours: the first is Leaves of Grass, a cycle of songs based on Walt Whitman’s great cycle of poems Leaves of Grass gathered together the Deathbed Edition of 1892. It is here that Mr Hersch found himself to be a happy bedfellow of the poet, who championed the “homegrown American sounds and ‘black music’ in particular” – the Jazz music central to Mr Hersch’s existence. As the pianist discovers “He praised what he called ‘heart music’ (earthy, informal, American) over ‘art music’ (refined, formal, European).” That and Walt Whitman’s “Calamus” poem(s):

“We two boys together clinging,
One the other never leaving…
Arm’d and fearless – eating, drinking, sleeping, loving
No law less than ourselves owning…”

Which brings Mr Hersch (and me) to the pianist’s other defining work (and section in the book). This work is a work of Jazz theatre – as Mr Hersch like to call it: My Coma Dreams, premiered in May 2011 at the Alexander Kasser Theatre at New Jersey’s Montclair State University. The devastating nature of AIDS makes the narrative of Fred Hersch’s My Coma Dreams excruciatingly poignant. 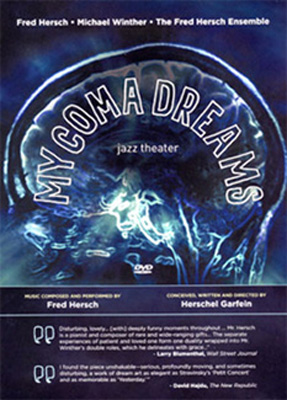 However, to turn it into something so profoundly beautiful speaks to the genius of Mr. Hersch and his long time artistic collaborator, Herschel Garfein. And then again, having a story to tell and telling it with elemental melancholy as well as good humour and ultimately joy as well are two different things altogether.

But it behoves the character of Mr. Hersch, who has weathered his condition for over thirty years now—one that led to the septic shock and his coma—with great stoicism. Naturally a condition that damns so completely that it sends the afflicted to hell and back and when it does those who have courage have been said to have lived to tell the tale. In the case of Fred Hersch the vivid dreams (or were they nightmares) he endured became the plot for this audacious story. Mr. Hersch has had a long and unmatched reputation for bringing many epic stories to life with his music. But this is perhaps the most powerful one of all.

For those two records of his experiences – indeed his whole life; his music, sexuality; his life and near death and for every other aspect of his life vividly described in Good Things Happen Slowly Fred Hersch will forever be remembered and commended for his overall intellect, perspicacity and valour.

Of Stars and Strings: A Biography of Sonny Greenwich by Mark Miller

Victoria Elena Ferreyra: “With a paintbrush in your hand you can change the world.”

Christian Tamburr: All about “The Awakening” and The Vibes that made it Happen