Home Books & Miscellany Fred Hersch: Good Things Happen Slowly
Fred Hersch: Good Things Happen Slowly
If you, as a reader, expect a literary chef-d’oeuvre in the vein of Sir Neville Cardus from this autobiography by Fred Hersch perish the thought. However, Good Things Happen Slowly: A Life in and Out of Jazz is a superb melodic masterpiece in the grand manner of the ones that Mr Hersch creates each time he sits down to play the piano. And as its narrative unfolds – slowly – it is redolent of sparkling humour, sinuous, often visceral excitement as it picks up from when Mr Hersch passed out of high school and entered college, and later the New England Conservatory, before joining the University of Life so to speak. In short it is uniquely ‘Fred Hersch’, which is much more than you can say about many, if not most, autobiographical works by musicians – Jazz or otherwise.

Musicians of the classical era wrote letters to parents, lovers and others. They did not write autobiographies. That part of their oeuvre, concerning the deepest part of their consciousness where fear and doubt lurked, was left to music teachers to piece together from music and those letters; from a hodgepodge of those thus to impart to their students, the life of the great composers; thus to fire up the imagination of the acolyte, as he or she journeyed through their lives as musicians. It’s not that Guttenberg does not exist for musicians, for composers; it’s just that most would rather have a ‘fake book’ in print, rather than an autobiography.

‘Published’ music is akin to providing a sort of fragment of a map that provides a route to a destination, which is invariably the end of the piece. The route itself was often a maze of secret paths that often led deeper into the strongbox of the composer’s/musician’s mind. Once you got there you were almost always not set free, but seduced and trapped by the melodically tremulous ganglions that were wired around the composer’s/musician’s brain. 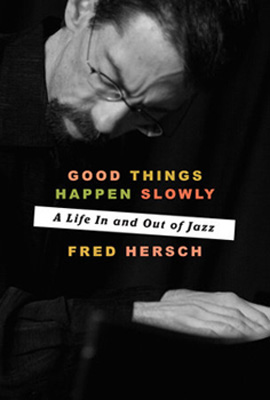 A lifelong prisoner of Bach, for instance, or Beethoven, Brahms, Schubert, Schumann; or Verdi and Wagner…which leads one to the question of how best to read this book by Fred Hersch. The answer is: whilst listening to his music – solos, duos, trios, other ensembles and so on…anything you can find.

The book is a joy to read; just as Mr Hersch’s music is to listen to. And if you can manage to read it ‘eyes wide shut’ – as you would listen to his music ‘eyes shut tight’ – then you’ll be better advised to do so, and as the colours and textures of Mr Hersch’s melodies come alive in the music so also are all of the senses awakened by the book. This often makes its narrative pitiless, almost as reading the narrative of Charles Mingus’ in Beneath The Underdog (when Mr Mingus’ was credible, of course). But unlike in Mr Mingus’ autobiography, there are two narratives running parallel in Mr Hersch’s: There is the one about Mr Hersch the musician and the one about Mr Hersch the (human being) and survivor of HIV/AIDS.

Both facets of Fred Hersch are really inseparable. In fact, in the narrative, they seem entwined like the two strands of DNA locked in an interminable dance. But unlike the happy coexistence of the polynucleotides in DNA, in Mr Hersch’s narrative these polynucleotides are adversarial, just as if they are engaged in an unstoppable Greco-Roman wrestling match, ‘till death do they part’. This is what makes the book exciting, perversely so, because the reader is a spectator (sometimes a vicarious one), helpless to intervene in this bloody sport. This is why listening to Fred Hersch’s music whilst reading his book is de rigueur; the music, always hopeful softens the blows of hopelessness.

This unending fight between hope and hopelessness is what probably goes on in the life of Fred Hersch every day. He doesn’t say as much in the book, but it is implicit in the narrative and explicit sometimes, as well, especially when we hear that he takes fists full of medicines morning and night to keep his HIV/AIDS under control. It is a constant battle for control and who better to know about it and – ultimately win – and live to tell us about it but Mr Hersch himself? And this is the most enthralling part of the book; the part about Mr Hersch’s ‘musical’ path to glory. The truism propounded by the philosopher, Horace – poeta nascitur, non fit is proven once again; evidence of this in the fact that despite every effort on Mr Hersch’s part to go against the grain, he emerges as a great musician.