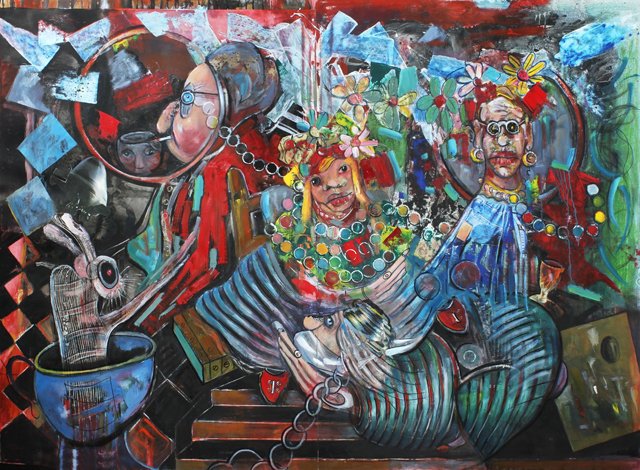 MC: Your art has always been highlighted by a particular feature: it is quite daring and crazy but, at the same time deeply coherent. Wouldn’t you agree?

FH: Well that crazy coherence you mention….if one is an expert observer, one can notice that life is jammed with paradoxes. Life is really nonsense. It is from that [latter point] that I let myself go. I flow in freedom and give birth to these “healing insanities” with which I intend to attract the attention of a “hypocritical society”. I work from chaos and while my conscious mind wanders I place objects and characters with a visual sense. I have no [previous] idea in mind, I just get to work and, to my surprise, when I finish the work, I realize I have created a lucid piece of art that contains a theme which can be read and followed. It is a sort of reasoned story that reflects the insanity which the world undergoes nowadays.

MC: What were your dreams as a kid?

FH: When I was a kid I dreamt of the immensity of la Pampa [the countryside], with animals and nature. I also daydreamed when I listened to music or when looking at a painting. I actually fantasized about the idea of living on a farm surrounded by the lagoons of Tapalqué. When you are a child your hope is intact! Especially on Fridays [without school] the dreams seemed to come true, like a stairway to Heaven.

To me, adults saw the world like a cube. I felt that if that cube was useful and profitable, so much the better. 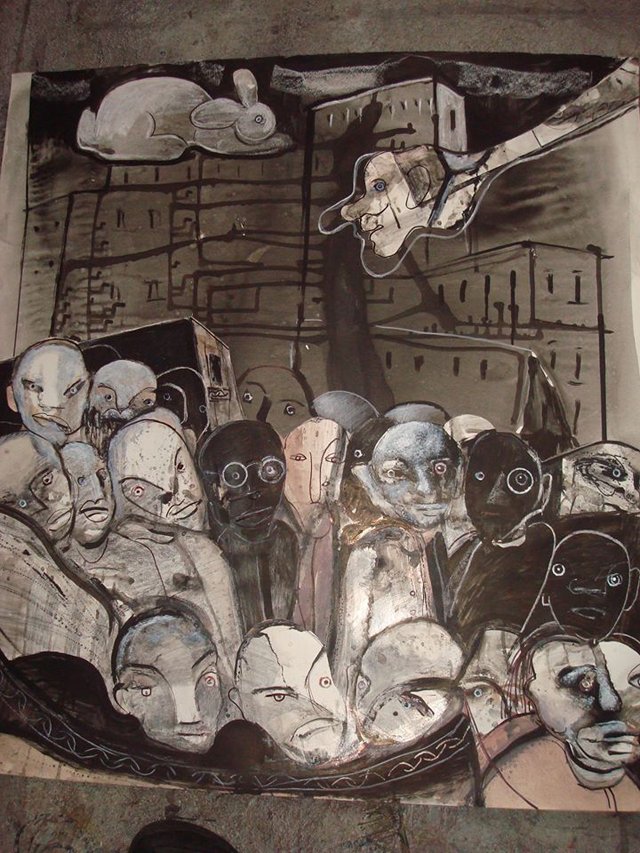 Of course when one is young one just accepts this pattern as normal. Beyond this construction of reality, there was little room for dreams and utopias; less so through the 50´s. During that period, teachers were so good at aiming at you with a [blackboard] duster… Ha! If a teacher called your mother for a meeting it was like facing a court of justice… Many times my only mistake was to write on the blackboard without permission. Even though, I can tell you that I became proficient at defending my desires and goals.

MC: You lived in Uruguay. What made you go there? What did you do?

FH: Uruguay was an “insight” trip; my Herman Hesse voice revealed to me; I had to go to experience life. This country in South America, so close to Argentina, became very friendly and cozy to me. Its people were so polite and nice that, two days after I arrived in Punta del Este [a worldwide famous beach for posh people] with my friend Miguel Angel Silva, we both found jobs; I worked in a real estate office next to the Fragata Bar and he sold dreams – that is he became a publicist.

I also left Argentina because I was fed up of the fact that you were what you had in your bank account rather than who you were as an individual. I was deeply blue, so I just left.

MC: Did you see Miguel again?

FH: Sure, he was a brother to me. Miguel died in September 2018. The last time we talked we both knew it would be our last conversation. He gave me a long hug; an eternal hug. He was such a good man! He surprised me all the time, he was so creative. You know, sometimes, he appears in my dreams. Here I see that he is calm and that comforts me.

MC: What made you come back [to Argentina]?

FH: My parent´s sadness… I couldn´t bear it. [He makes a timeless pause; I wait, with respect.] My parents sent me waterfalls of letters, grieving messages that stabbed me like a sharp dagger. I remember wondering about the price of freedom. When I came back to Buenos Aires I realized that Uruguay was the start of my total commitment to painting and drawing.