Dottie Dodgion & Wayne Enstice: The Lady Swings: Memoirs of a Jazz Drummer The world of music – any style or form of it – is a world of patrilineal structures. In classical music, for instance one has only to think of Robert Schumann to recall that his wife Clara was considerably endowed as a composer and yet, in her day she was championed by few; chiefly Johannes Brahms [whose interest in her was probably driven by romantic associations]. As it was in the world of classical music so it is also in the world of contemporary music. Nonetheless to find that Dottie Dodgion is barely spoken of today is certainly a surprise – especially as the now-91-year-old drummer and vocalist has held the rhythmist’s chair is numerous ensembles for decades.

The former Mrs Dodgion is not the only all-but-forgotten female musician/drummer albeit the world of popular music boasts such luminaries as Pauline Braddy, Sheila E, Karen Carpenter, Susie Ibarra, Marilyn Mazur, Cindy Blackman-Santana, Allison Miller, Sherrie Maricle and, of course, Terri Lyne Carrington [to name just a few women whose names come immediately to mind]. But like Viola Smith before her, Dottie Dodgion continues to remain on the fringes of the history of brilliant rhythmists – both men and women – who are rarely talked about let alone given their due even among their musical peers.

In Ms Dodgion’s case, it took the committing of her life to an autobiography – exquisitely co-authored by Wayne Enstice and published in this year of the global pandemic as The Lady Swings: Memoirs of a Jazz Drummer [University of Illinois Press] – to put a focus on a career that has been monumental by any stretch of the imagination. Ms Dodgion’s relative obscurity has everything to do with the fact that her gifts were seemingly deliberately “kept in the shadows” by the men with whom she was associated with musically or otherwise – with the possible exception of Jerry Dodgion [her last ex-husband, who – by her own admission – not only encouraged her, but even solicited gigs for her early on in their marriage].

Dottie Dodgion was born Dorothy Rosalie Giaimo on July 27, 1929 in Brea, California to a Sicilian family [her mother was of Cherokee-Irish extraction]. She grew into drumming because her father Charles “Chuck” Giaimo was an itinerant musician-drummer who spent much of his life as a touring drummer-musician, away from his family. The young Dottie joined him after he “kidnapped” her from her mother and took her on the road with him for several years before returning her to her mother. By the time Her father returned to her to his parents’ house – where her mother also resided] she was a seasoned “listener” of jazz, schooled by her father with whom she was “listening” to music, schooled in the silence of the room in which he played her his favourite music by the great swing bands of the day.

Taught to listen to music in silence the young Ms Dodgion began to understand the nuances of the melodic, harmonic and rhythmic conception of jazz; something that shaped her own musical conception almost as soon as she launched on her own career as a drummer. Her performing life as a drummer didn’t take off immediately as she was all-but-discouraged from her yearning to emulate her father as a drummer. Instead she was thrust before the microphone, as a vocalist – because that was simply the only acceptable position for a woman in a jazz ensemble. In fact she might almost never have become a drummer were it not for a chance encounter with a tap-dancer named Hoppy, an MC who her father entrusted her to when she lived and travelled with him and who probably gave her the first real lessons in the art of rhythm. 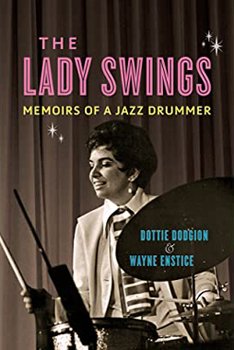 Between her father, Hoppy, Eugene Wright – bassist and a charter member of Dave Brubeck’s classic quartet – and Jerry Dodgion, Dottie Dodgion received all the encouragement to become the great drummer that she is today. Unfortunately music was [and largely is] dominated by men who, it seems will do everything to keep even a musician and rhythmist as great as Dottie Dodgion from being treated as a peer. This would account for why Ms Dodgion has so few recordings as a leader to her credit and indeed, why she is listed on so few recordings made by others despite the fact that she has played with some of the most celebrated musicians in the history of jazz. The introduction of the book lists several pianists [Kenny Barron, John Coates Jr, Marian McPartland and Francesca Tanksley and others], bassists [Eugene Wright, Ron Carter, George Mraz, Eddie Gomez and others] and horn players [Frank Wess, Phil Woods, Jerry Dodgion, Richie Cole among scores of others] and the jazz greats Joe Venuti and Melba Liston with whom Ms Dodgion has had enduring musical relationships and frequently appeared on stage as well.

The book unfolds in a series of interviews that take place in a kind of time-lapse backstage pass, in which Ms Dodgion takes Mr Enstice back in time, backstage to where her life began and progresses. Although it reveals some harsh realities – such as a rape during her childhood and the breakdown of two relationships [first with bassist Monty Budwig and later with alto saxophonist Jerry Dodgion] – much of it also focuses on her unique rhythmic conception. The completely self-taught Ms Dodgion calls this her “apple pie, apple pie, apple pie, tempo which forms the core of her conception of time. She was guided – to a large extent – by the steady hand and sagacious advice of bassist Eugene Wright to whom she is – naturally – eternally grateful throughout the book. And even though she never learned to read music, Ms Dodgion has one of the sharpest, biggest set of ears in music, capable of playing anything she listens to even once.

Mr Enstice’s prose comes appears to come from successive interviews with Ms Dodgion. But he is a fine writer, whose own turn of phrase is highly personal. This is what gives the book a certain touch of elegance. It is written in a breathtaking, breezy narrative that takes the reader on a musical journey that is reflected as if in the mirror of Ms Dodgion’s life itself. Chapters are brief and in each of them the prose is well-crafted, never frothy and always stays focused on the two main premises of the book: Ms Dodgion’s celebrated – but unknown – life as a musician and on the rhythmic conception which came to mark her musicality as one of the finest [practitioners of time in her day. It is honest and captures the character of Ms Dodgion who comes across not only as a fine musician but also as a fine human being, generous to a fault despite being – throughout her long life – at the receiving end of many masochistic men determined to either belittle her; many of whom are the reason her remarkable achievements remain as little-known today as they were in the heyday of her career.

This is what makes the book so exciting: the mere fact that you will discover a musician who gave – and continues to give – her life to the music she fell in love with as a child and one who remains its guardian, keeping the flame aglow even in the sunset of her life. Ms Dodgion rightfully gets due respect – and high praise – from none other than Miss Carrington who holds Ms Dodgion in awe as one of the unacknowledged pillars of jazz. Miss Carrington says: “after the [relative] demise of the big bands, including the all-woman orchestras, and before the rise of jazz studies in colleges and universities attracted unprecedented numbers of women pursuing careers in jazz.” Most importantly, we learn that Ms Dodgion – although she could not read music – had an exquisitely tuned ear; perhaps even pitch perfect. She was also a keen student of the music long before it became fashionable to “study” it [as Miss Carrington points out.

Dottie Dodgion – Deed I do

There are many fascinating aspects of drumming that Ms Dodgion talks about using a very personal and unconventional turn of phrase. The chapter – “Scene Nine: Apple Pie, Apple Pie, Apple Pie” [page 60] is one such lesson that makes riveting reading. On page 66, [the chapter entitled “A Little Help From My Friends”] she gives us an astute lesson in her rhythmic conception – how she eschewed “lead-foot”, for instance; and how she tunes each of her drums. In this regard, Chapter 10 [or as Ms Dodgion refers to each chapter as “Scene Ten” is the apogee of Ms Dodgion’s unique conception. Listening to her speak about it is not simply fascinating, but it will reveal [at least it revealed to me] why many recordings miss the mark in production; it’s simply because not enough attention is paid to the way the bass drums is tuned in relation to the contrabass. Listening to the recordings that Ms Dodgion made after reading this will put her squarely in the realm of the drummers she [by her own admission] most admires – Kenny “Klook” Clarke, Kenny Clare, “Tootie” Heath.

It’s also a revelation – though hardly surprising – that Ms Dodgion was sought after both as a singer and drummer by Charles Mingus, Benny Goodman, Joe Venuti, Zoot Sims and other heavyweights in the industry. This book also sets the record straight as to why – despite the magnificent performances that Ms Dodgion was capable of [and brought to the stage] she was never given her due – even by the likes of Benny Goodman. To have come through all that and top have endured the personal hardship that she had earning a living to keep home and heart together is truly courageous. It’s hard not to be disarmed by her smile and her playing [as pone would ascertain from the videos included here].

The 91-year old Dottie Dodgion’s story – like that of the great bassist [and guitarist] Carol Kaye’s – is not a feminist one. However, more importantly, it is a cautionary tale about giving credit where it is due in the interest of keeping the art of jazz – and, indeed, all contemporary music alive and, more importantly, artful. Published as it has been in the time of the #MeToo movement Ms Dodgion’s book not only makes compelling reading, but also serves to tell us that the time’s up for industry pundits and black-suited long-nosed bean counters to rule the patrilineal roost if great music – and great lives such as Dottie Dodgion’s – are to get their just desserts.