Home Books & Miscellany Cuba: The History that Anacaona Made 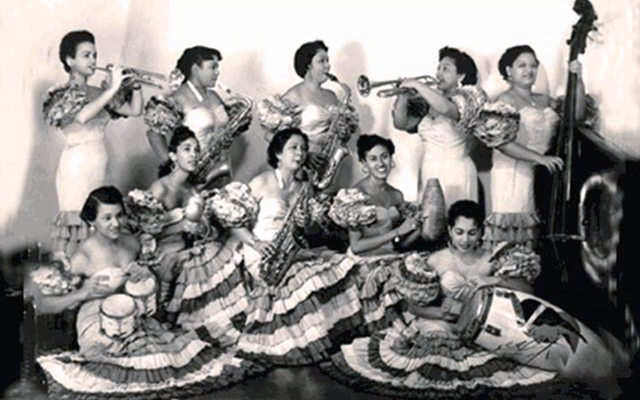 They were called the “Queens of Havana” in the 30’s when it was anathema for young women to be seen at nightclubs, let alone perform there, and perform they did with savoir faire breaking rules, stirring souls and creating history that would change forever the course of women’s role in the musical arts in Cuba. In her account of it all, Alicia Castro, one of the last surviving members of Anacaona, tells the story of her sisters in Queens of Havana, the amazing adventures of Cuba’s all-girl dance band, to Ingrid Kummels and Manfred Schafer.

1930’s Cuba: The shock of seeing ten beautiful young ladies on stage seducing the audience—including some rather raucous members—with beautifully constructed and rehearsed son and danzón; with lively cha-cha-chá as the girls swayed gently to the sounds of the saxophones and tres and bass and güiro all of which they played themselves… This must have been something unheard of as long ago as that. Cuba was a fiercely patriarchal society then, but Emma, Bola, Ada, Flora, Ondina, Cachito, Cachita, Alicia, Elsa Rigual and Milla were defiant. Encouraged by their parents—a father whose retail business enabled the girls to have a musical education, no matter how basic—and a mother who adored her children and never lost trust in them, the girls not only planned and executed a career that was the envy of many male musicians, as they played their own material, much to the chagrin of many male band-leaders. During that time Bandleaders such as Dizzy Gillespie, Duke Ellington and Cab Calloway jumped up and took notice. As did the great Celia Cruz, of whom mush is said in the book by Alicia Castro.

Ms. Castro is a fine story teller. She can tell the mundane and the glorious, never mixing the two but always keeping her best witticisms for the men in the lives of her sisters and more especially the ones who wooed her. Many of these admirers were met when the band toured not only in Cuba, but in other parts of Latin America. Mexico was a big hit for the girls. But the biggest thrill seems to have come when the group was invited to travel to Florida and to New York, where they gave the performances of their lives. Everywhere there were admiring audiences, especially wealthy men who were hard to resist. Some of these were fine gentlemen, but several had back-stories, were married, but promised to give up their wives—more like a bare-faced lie. But on tour the girls—now all grown up—became lonely and easily fell in love. And it is here that the story comes apart.

With fewer members available to play the great variety of instruments that the ladies of Anacaona had come to play as an ensemble, the remaining members of the group decided to master other instruments and as a result they came to master each other’s instruments. This, was not, however, the beginning of the end. The resilience of the women of Anacaona was legendary and Alicia Castro describes it best when she says that: “I feel happy when former colleagues who now have a worldwide reputation remember the years they spent with us. It’s great that they are successful, that they are able to enjoy their moment of glory. That’s why we musicians practice for years, trying night after night to capture an audience, and when without you really knowing how or why, fate is kind and you stand in the spotlight and receive applause from the crowd—it feels like justification for all the time and energy you invested over the years. Suddenly everyone thinks you’re wonderful.”