Home Books & Miscellany Christian Tamburr: All about “The Awakening” and The Vibes that made it...
When you think about the vibraphone it’s difficult to think beyond Lionel Hampton, Red Norvo, Milt Jackson, Bobby Hutcherson, Gary Burton – and if you’re Canadian [like me] Peter Appleyard. A new vibraphone generation is also beginning to assert itself and names such as Bill Ware, Joe Locke, Stefon Harris, Warren Wolf and [now] Joel Ross leap to mind. This is a pity, because someone such as Christian Tamburr has also deserved your [and my] attention.

While someone like me has continued to remain relatively unenlightened about his existence, Mr Tamburr has, in fact, made an enviable name for himself as a recording and travelling musician as well as a teacher. He has performed with his quartets and quintets in clubs and hotels and in vaunted venues such as The Lincoln Center and The Kennedy Center in New York City. He has also toured and performed at Jazz Festivals around the world from countries in Europe and The Middle East, to elsewhere in Asia. He is [and also has been] designated “Musical Director” for unique corporate music ventures; for Cirque du Soleil [Macau], Julio Iglesias, Penn & Teller, Landau Eugene Murphy and, now, with vocalist Clint Holmes. 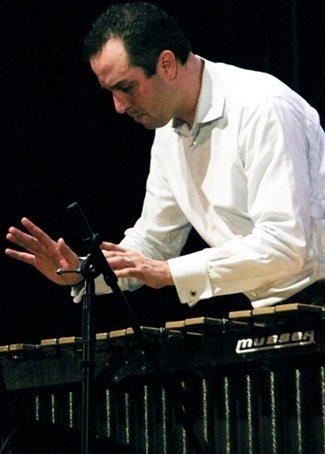 Moreover, Mr Tamburr has taken the stage with some of the most famous names in Jazz: Clark Terry, James Moody, Kenny Barron, Milt Hinton, Bucky Pizzarelli, Tal Farlow, Mark Murphy, Marcus Printup and Nicolas Payton, just to name a few. So there is really no excuse for not knowing who Mr Tamburr is – musically speaking. And now we have even more important reason to know just who Mr Tamburr is, for he has created some truly iconic music around the sculptures of Seward Johnson. His recording, The Awakening is a result of that adventure.

The idea first took root in Mr Tamburr’s creative consciousness during and after a walk through The Grounds for Sculpture in Princeton, New Jersey. As you would imagine, the vibraphonist had a lot to say and he said it every so meaningfully and exquisitely through music. Mr Tamburr is also an articulate about why he makes music; about technique, approach to and how he has bonded with his instrument of choice: the vibraphone. Of course he would surely prefer to let his music do the “talking”, but he graciously took the time to talk to us about all of the above.

JazzdaGama: So Christian, when and how did your love affair with music begin?

Christian Tamburr: There was always music on in my home. My dad played guitar for fun and when he wasn’t playing he had the radio on. Most of what he listened lots of guitar players from Leo Kotkie to Pat Metheny. When I was 8 years old I inherited a baby grand piano. I loved to sit at that instrument and try to hear and plunk out what my dad was playing or listening to on the piano.

JdG: What drew you to Black American Music?

CT: My first introduction to Jazz/BAM was in Jr. High School. My band director rolled a vibraphone out and sent me home with a few recordings of Lionel Hampton. Some recordings were of his small group with Benny Goodman and some were of his big band. It was just so swinging… infectious… made you want to dance and just play it all over and over again. The improvisation and the stylistic approach to how the instruments evoked such emotion draw you in and reaching for more of the likes. I went to the band director and asked for more “jazz” records and he piled on everything from Miles Davis to Weather Report, to Ellington.

JdG: Tell me, when did you know that the vibraphone was “your” instrument?

CT: As I mentioned my band director rolled the vibraphone out one day in jazz band and said “When you’re not playing the drums” you’re to be playing this. I always had a knack for making up melodies which I think came from my time at the piano when I was younger. Playing the lead lines on the vibes and solo sort of came naturally… I fell in love with the instrument, its uniqueness and also at that age fell in love with the idea that it was something I was actually good at. It gave me my direction, my purpose… which I haven’t looked back since.