Unlike many books of historic value, the writing is far from being stilted. In fact the prose is rather elegant and racy as well. Moreover, Mr. Birnbaum has a conversational style and it is possible to imagine a scenario where the reader is in a large audience listening to the writer speaking. 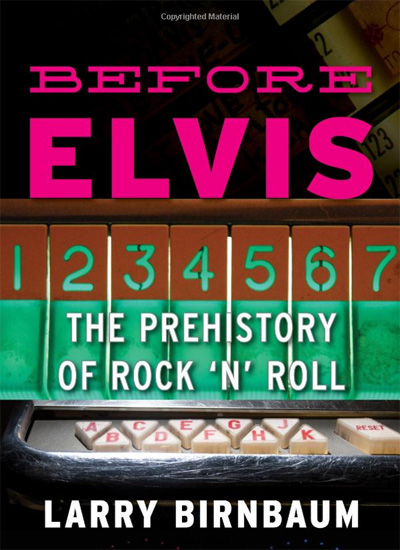 It is not really difficult to debunk the theory that Elvis Presley was the inventor of Rock and Roll. Nor is it that difficult to do the same for Bill Haley and the Comets. It is one thing to debunk theories based upon popular myth and spoken history, but that is not what history is all about. Anecdotal evidence is not the stuff of history nor is it in the historicity of things spoken on radio by presenters who often performed nothing but paid publicity. But it is quite another thing to prove the facts so compelling a fashion so as to re-write history; or in the case of Larry Birnbaum’s Before Elvis Presley: The Pre-history of Rock ‘n’ Roll to do what is now popularly accepted as writing the prequel to the history of Rock and Roll is an important endeavour. It might also turn out to be horribly unpopular because of the huge industry that is Elvis Presley. For a decade and more; even before he hit Beale Street, Elvis Presley was ever the white dude; the quintessential country and western singer who fancied himself as a balladeer, who was channelled by Sam Phillips into singing the music of African Americans and Gospel singers from Holy Rollin’ churches and who actually post-dated rock and roll by at least five—if not more—years. However, it is not merely about that either. Then there were the Beatles and the Rolling Stones and later a slew of British artists that came to be called the “British Invasion”. So it pays to set the record straight; to draw a more convincing line creating the book of genesis of Rock and Roll. And if anyone is in a position to do so it is Mr. Birnbaum, who seems to have listened to and curated an astronomical number of recordings and songs, matching dates of these recordings with street dates, musicians with sessions; and then changing perspective from the micro view, and working towards developing a macro perspective from where a definitive chronology has been developed.

Before Elvis is considerably well-researched and meticulously written. Details abound not so much because the writer wishes to immortalise himself, but because they are there to correct what has gone wrong and continues to go wrong because most writers of books are too lazy to research extensively, or borrow from sources that are too iffy for a serious work. Here is an early look at what happens when Mr. Birnbaum puts pen to paper: “Two R&B records (Mr. Birnbaum has already established that R&B is a pre-cursor to any music that even remotely resembled rock and roll) titled “Rock Around The Clock” had previously been released, Hal “Cornbread” Singer’s in 1950 and Wally Mercer’s in 1952. Mercer’s is an entirely different song, but Singer’s “Rock Around The Clock,” co-written by Singer by Singer and Sam Thread, resembles Myers and Freedman’s and contains the line “One for the money, two for the show, three make ready, four let’s go.” Haley performed “Rock Around The Clock” in 1953, but because Dave Miller disliked James Myers, he would not allow Haley to record it on Essex.” The idea here is to show how, by page 9, the page from where the quote is taken, the transcendence from country to callow copies of R&B hits is already established from listening to and analysing the recordings; then going to authentic sources (this incident came from John Swenson’s 1982 biography of Bill Haley. Prior to page 9, it is all about the early work of Bill Haley and Elvis Presley, both of whom were strictly country music practitioners and only vaguely hinted at Rock and Roll—not considered a “white man’s” music because its only precedence was the erstwhile slave or sharecropper, who brought in the changes from the blues, then jazz and gospel, when jazz was considered too evil. This soon evolved into R&B, which was the root of Rock and Roll.

Here is Mr. Birnbaum again: “The words “rock” and “roll” appeared in the titles or lyrics of blues, jazz and gospel songs throughout the 1920s and 1930s. The married couple Coot Grant and Kid Wilson recorded the vaudeville-style “Rock, Aunt Dinah, Rock” in 1925, the Four Harmony Kings recorded the spiritual “Rolling and Rocker Dem in His Arms” in 1926, and Sadie McKinney recoded the flowery, mournful “Rock Away” in 1927.” This goes on for several more sentences, with dates of further recordings that Mr. Birnbaum has heard while discussing his own proto-history model for what is to come later in the book. While most writers—especially those writing about jazz—like to suggest that music—in that case, jazz—is an agglomeration of musical influences including blues, gospel, folk and classical musics, which is nothing but a suggestion that jazz music came from a mixture of all musics and which is fallacious, it is true that the antecedents of Rock and Roll descended from the Blues. As more and more white musicians picked it up and as it spread through many white record labels and radio stations, the lines between the blues and gospel, as well as from country music blurred and rock became more defined. This is often attributed to Elvis Presley, but in reality the movement started much before that with Chuck Berry and several others. Mr. Birnbaum is at pains to point this out as well and as is his manner, he backs this up with considerable proof from the right sources. During the time of Elvis Presley and Bill Haley, and later Jerry Lee Lewis, much was made of a kind of “big bang” theory which gave rise to Rock and Roll. The reality was quite different. And it took the British rock and roll bands that came across the pond, especially the Beatles in 1963 to really insist that they merely borrowed idioms and metaphors from blues musicians such as Muddy Waters, Howlin’ Wolf and Sleepy John Estes. The Rolling Stones did the same when they mentioned that their main inspiration for the music came from Chuck Berry.

All these matters are substantially cleared up as Mr. Birnbaum sets out to prove his thesis. Unlike many books of historic value, the writing is far from being stilted. In fact the prose is rather elegant and racy as well. Moreover, Mr. Birnbaum has a conversational style and it is possible to imagine a scenario where the reader is in a large audience listening to the writer speaking. The reader is further enthralled by the substantive writing with which it is easy to become engaged; even enthralled and enraptured. This is also because to the aficionado and the serious student of American ethnomusicology the touchstones in terms of the music are all there. Larry Birnbaum brings it all alive with his writing that combines the mention of anthemic music and a tone and manner that mirrors a fine detective novel. It is clear from his writing that Mr. Birnbaum not only has a passion for the music, but is also a serious student of it. This is a big help for not only the writer, who can go to great lengths to make his thesis known and to prove it, but also benefits the reader who might be on the fringe, such as readers of a work that might also be interested in cultural anthropology. While this is not a book about that subject, the fact that it is written about a music that is so all encompassing it also penetrates that realm.

Another aspect of the music that is exceptionally dealt with is the importance of the blues and its impact not only on jazz, but also on rock and roll. By drawing a connection, Mr. Birnbaum suggests that the blues may be at the heart of all American music. This may not be such a far-fetched idea after all. Many critics—especially the late Amiri Baraka—have made that suggestion late in the 1960s when the so-called avant-garde of music followed the Bebop movement. Even the great jazz saxophonist Albert Ayler called his music the New Blues and his late recordings have been claimed by the jazz aficionado as well as the rock and fan alike. Dwelling, as he does, on the genealogy from the blues to rock makes for fascinating reading. The historicity of these sections in the book adds credence to the fact that American music may have been built on the foundation of African American and African Caribbean music. This is a radical theory, but again, with so much proof in terms of recorded evidence it may be hard to argue against it. Finally, Mr. Birnbaum sets up the next big adventure and that is how this would follow from here into the realm of Rap and Hip Hop. But that is quite another story.