Bebop Fairy Tales – An Historical Fiction Trilogy on Jazz, Intolerance, and Baseball: Mark Ruffin Although the title of Mark Ruffin’s book Bebop Fairy Tales is eminently appealing there is a catch in its subheading. This condition sine quo non is ensconced in the whimsical contronym of the words: “Historical Fiction”. However, when it comes to the very ephemeral nature of the music of Jazz – the thread that connects all three “fairy tales” in this book – in a sense everything that is “fictional” is also “factual”. Songs; their melodies defined by black dots on a page – like the words in Mr Ruffin’s book – once improvised, reharmonised with tumbling offbeat rhythms retain in every essence the memory of the song. Thus, in a very real and powerful and elemental manner Mr Ruffin’s stores are, in fact, liberated like jazzy improvisations into the senses justifying; even becoming a kind of melodic, contronymical notion; a kind of jazz improvisation in words.

Each of the three extended pieces – just like the bebop of Charlie Parker’s invention – also defies definition. “Thriving on a riff”, so to speak, each is a wild romp that brings to life aspects of the Black American experience; in which the pain of its “history” is cast as a gigantic shadow against the backdrop of white society, their storylines meandering through the alley ways of black and white neighbour hoods, housing both jook joints and luxurious mansions with bowling greens and luxuriant gardens often forbidden to black folk. Most memorably Mr Ruffin’s pen seems to caress real characters as they appear in the whimsy ephemera of their world creating the “fictional history” that the author so vividly and compellingly describes. 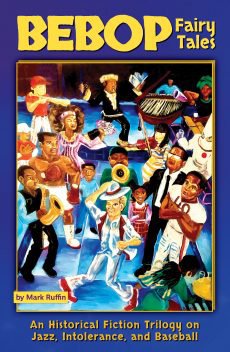 Mr Ruffin’s book is not the first to be wrought – consciously or unconsciously – with the tools of historical fairytales employed in the mythic landscape of Jazz. Charles Mingus’ Beneath The Underdog [Alfred A. Knopf, 1971] and Frank Foster: Jazz Master – An Autobiography [Cecilia Foster, 2013] are two similarly-cast books that come to mind. The books describe the derring-do of the great composer and contrabassist, and the tenor saxophonist respectively; both books unveil musical and diabolically funny extracurricular lives of the giants of Jazz. But Mr Ruffin’s proximity to the gene pool that produced both Mr Mingus and Mr Foster gives him an enviable, inside line on the magical – and often sleazy goings on of that world; to the use and exploitation of racial stereotypes, their travails and – almost always – there painful triumphs.

The author is a well-known and beloved raconteur, radio personality, promoter and a proverbial, all-round keeper of the flame of the Music of Jazz. His celebrated career in broadcast journalism has provided him with access to many figures that made the music of black America world famous, eminently notorious and by virtue of the aura of titanic legend that surrounds all of the anecdotal evidence ensconced in the lives of the famous figures – a mythology worth recording for posterity. Never mind the tautology of “historical fairy tales”. This is the stuff that will live in the literary genres of generations both “history” as well as “historical fiction”. Also important is the fact that Mr Ruffin acknowledges and exploits – rightfully so – the fact that as in music, black Americans also contributed to that iconic American sport of baseball.

While Mr Ruffin’s book is not, by any chance a chaste account of the proverbial Jazz Life, its narrative language often eschews the fabulous descriptions of sexual encounters that both Mr Mingus and Mr Foster boast of. It is not elegant prose either; perhaps it does not need to be. But in a peculiar way, by caressing the skin of his protagonists, Mr Ruffin brings them alive in a singular way. His memoralisation of Gene “Jug” Ammons in “Saturday Night Fish Fry” as well as the white dowager queen, Delilah are brilliant examples of this kind of astute character development. This can only come from eagle-eyed observation that leads to penetrating insights. His first person narrative in “’Round Midnight with the Ku Klux Klan” of a gay white boy, who grows to manhood surrounded by his close-knit community of old-fashioned white racist sports fans is both hilarious, tragic and – most importantly – all-too-real. James Baldwin – ghost-like – also makes his towering presence felt here.

The final story, “Sidewinder”, riffed off Lee Morgan’s iconic Blue Note recording is simply breathtaking. Here we have a kind of resolution of musical and racial inequity as the protagonist, a brilliant young violinist and an aficionado of jazz, baseball and football; fan of everything from Lee Morgan to Malcolm X and Jim Brown, who meets and falls in love with a beautiful young oriental cellist Ora Jean Whu. Although all of the stories resolve themselves in a manner that is literarily satisfactory, this last story is a triumph of all things societal – cultural, musical and racial.

This is Mr Ruffin’s first book. It is a rather good first attempt at a challenging prose form: the short story. Mr Ruffin may pass muster on the structural aspects of the story, which he exchanges for a looser, more conversational narrative. But each of these loosely-written narratives is vividly written. Each narrative brings locales and characters – black and white – to life in a vivid and exciting manner, colloquialisms and all. This is “lived-experience” at its best and the fact that Mr Ruffin is in the thick of it with all that he’s no doubt experienced in real life makes each of this “historical fiction” all the more real in a book that is utterly memorable – one that is to be cheered with the best of them.