Art Kane: Harlem 1958 – The 60th Anniversary Edition
It is entirely possible that in a world of not-so-far-fetched ideas, perhaps the greatest cultural export from the United States is Jazz music. Some may say it’s the greatest cultural phenomenon since the dawn of the 20th century. To be sure, in many countries of the world, it is entirely possible that men and women of a certain generation might even recall Duke Ellington, Louis Armstrong and Dizzy Gillespie as being among their “most famous” Americans alongside Muhammed Ali, John F. Kennedy and Barak Obama. Two Presidents, a legendary sportsman and activist and three Jazz musicians? Why is that so hard to comprehend? After all, if you travel the world – from South America, to Europe, the Middle East, Asia and the Far East after an American President few public figures have travelled further than the boxer and the three Jazz musicians. Indeed, with the advent of radio, the Voice of America and its iconic host Willis Conover made Jazz a household name worldwide; particularly Duke Ellington, whose chart “Take the A Train”, which became the signature tune of his legendary programme “The Voice of America Jazz Hour”. 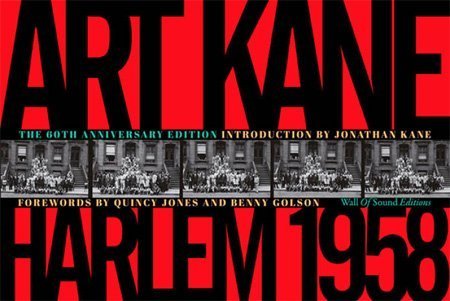 But let’s be clear: “Jazz” – America’s music – was the invention of the African-American, who invented its rhythmic idiom, distilled from the Blues, and fashioned it into a cultural phenomenon so powerful that it has come to dominate hearts and minds the world over. Still, it was a music that was created in insularity; something so vivid and daring and out of the mainstream that it had to be first practiced almost surreptitiously in order to not draw too much attention to itself, yet elevate the spirits of a downtrodden people. And because it was practiced in relative obscurity and grew, at first, in relative secret as well, its history is only become a matter of urgency after the fact. It should come as no surprise therefore that much of the history of Jazz is anecdotal. Indeed its study and most notably the historic proportions of it are a mid-20th century experience. This is why every recording and photograph and bit of every scrap of discographical information is as precious as a rare gem. 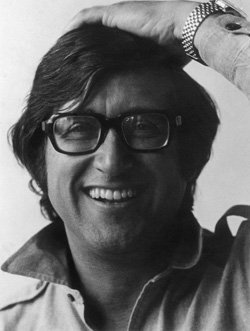 It is in this world of precious objet d’art that we should approach perhaps the most famous photograph in Jazz history: the one that has now come to be called A Great Day in Harlem or simply, Harlem 1958 by the legendary photographer and graphic designer Art Kane (1925-1995). This iconic photograph spread over two pages of the January 1959 issue of Esquire magazine (for whom it was taken) as part of a feature entitled “The Golden Age of Jazz”. It was, as we are told by Mr Kane’s son, the de-facto editor of this glorious coffee-table book commemorating 60 years of the day the photograph was taken (August 12, 1958), Jonathan Kane, “The moment that legendary issue of Esquire was published, Art Kane quit his job at the (Irving Serwer Agency) and his career as a photographer took off like a rocket. It was a bold and audacious idea, to suggest a huge group portrait of the greatest names in jazz, outdoors in front of a brownstone in Harlem, with a 10:00 am call time no less.”

As it turned out that day, when 57 jazz musicians assembled at 17 East 126th Street between Fifth and Madison Avenue for a black and white photograph by a freelance photographer, turned out to be – as it is now known as – A Great Day in Harlem. In a world where it has been said – and often proved – that a picture is worth a thousand words, this one also comes closest to being the proverbial “one for the history books” for many reasons. First: it’s probably unlikely that these 57 musicians had ever been together in one place, or would likely ever be together again. This fact is suggested by Benny Golson’s essay that appears as the Foreword of this book, which brings Mr Kane’s (and Esquire’s) outdoor session to life.

A great Jazz music composer, bandleader and tenor saxophonist, Mr Golson who was invited to be a part of the photograph by music producer, critic and historian Nat Hentoff and reports: “When I arrived there, there were all of my heroes. Wow! Art Blakey, Count Basie, Coleman Hawkins, Thelonious Monk, Charlie Mingus. I had never imagined seeing so many consequential luminaries all gathered at the same place at the same time. This was unreal. There were no questions like, ‘How much does the gig pay?’ because this was no gig. All of these musicians showed up to be photographed because of our Nexus – Jazz! They had coalesced into one metaphorical, consequential, stentorian ‘voice’ covering myriad histories and dispositions. The lantern of the eye had not dimmed, and the heart had not lost a beat. They were there to not only leave their images, but to share and recall their varied lives as jazz musicians with one another. It was not a time of meaningless vetting, but backslapping and happily rejoicing. It was a time of past jocular events. It was a time of recalling things that happened or didn’t happen. It was a time of recalling serious matters. It was a time of asking, ‘How are the kids?, or ‘Whatever happen to old Johnny?’ But it was mostly a time of great happiness, a time of sharing motivational hearts, a time that had a life all its own taking place.” 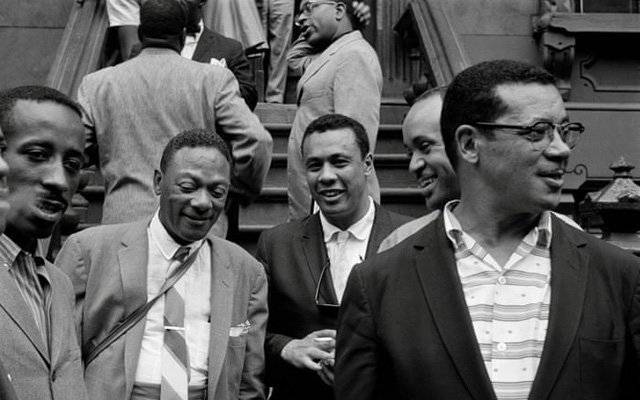 Mr Golson is one of only two musicians in eth iconic photograph who are still alive today; the other is Sonny Rollins. Quincy Jones, who was studying with another legendary musician and pedagogue Nadia Boulanger in Paris at the time. He missed the photo-call. But he has contributed an essay as Preface to the book. As with everything that Mr Jones – or Q, as he is more widely known – writes this essay too comes from a place deep within his heart and psyche. It is a moving account of what Jazz means to a musician; and there are few – very few – who have lived the experience as Q has. Art Kane’s son, Jonathan has contributed the Introduction to this fine book, which falls somewhere in between adoring son of the greatest photographers of post-World War II, a witness to the history and a musician and drummer who continues in the tradition of the great roots of Jazz; that is to say, the blues. The younger Kane’s considerable achievement as the editor of this book may be to have unlocked the vault that has kept the treasures of his father’s most famous photograph. And these treasures are at the heart of this book – and the iconic photograph.

There are almost one hundred pages devoted to this single double-spread photograph that the January, 1959 issue of Esquire magazine. The photograph – the one that finally graced the issue of the magazine – unfolds almost in slow motion from contact sheets to final, double spread print and the codicil that takes the form of a silhouette image that functions as a key to the people in the photograph. As it does so over these matt-finished pages of the book, it feels like viewing an old film from the Director’s chair. Magically we see the stage being set as Mr Kane is directing the players onto the (sound) stage. We are told by none other than Mr. Kane himself that he rolled an issue of the New York Times, into a make-shift megaphone and began directing the “players” into his preferred frame from across the street. And between this and other anecdotes he tells us in his essay that just came before the film began to advance in the camera, we can almost hear the chatter and noise of the photographer directing the shot amid the noises of the street. 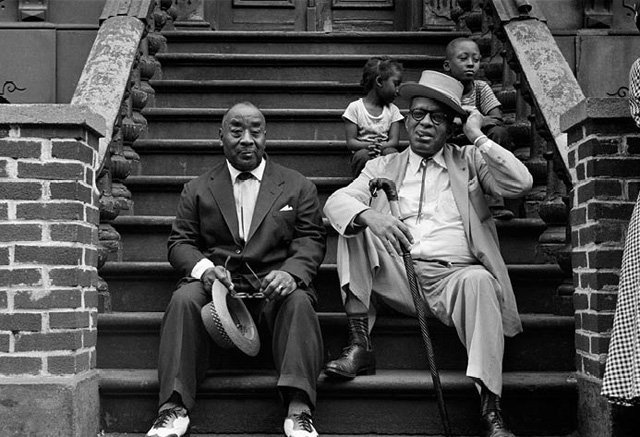 Even as the film advances in Mr Kane’s camera, the photographs in the camera begin to take shape as if life itself is being planted on film. Stop and start. A shout here and there to shape the landscape of the sidewalk and the stoop into the scene that he sees through the lens of his camera. An eye on the light, praying that a cloud does not obscure the sun; that it doesn’t rain. Mr Kane recalls in an essay where he recalls events that are about to unfold before the camera shutter first opens: “I had one marvelous assistant with me up there that day. He was Steve Frankfurter… He was supposed to help load the two cameras I had borrowed, but he was as inept as I was in loading them. First he put the film in backwards, and I yelled at him, ‘What are you doing? You’re putting it in backwards!’” But everything in front of the photographer coalesces. And then it happens: a slew of photographs on 120mm and 35mm film; frame after frame, after frame. Viewing the contact sheets is evocative of watching the shutter open and close noisily, second after second. We see full frames, and mid-shots, details of the scene; landscape and portrait photographs; candid and posed as they should have been; repeat after repeat; a tiny adjustment here and a minute change there.

This seems to go on interminably from the contact sheet to the full frames blow-up to 10×12 to fit the book. The feeling of a moving picture – a movie – is enhanced by the fact that one of those present, Milt Hinton, was an avid photographer, also bent on documenting the whole scene along with his wife Mona, who appears in a frame holding a 16mm camera. Mr Hinton, who has had exhibitions and books featuring his photographs, also, it appears shot footage, which later became an enhancing part of Jean Bach’s enthralling feature-length documentary A Great Day in Harlem that explored the story behind Mr Kane’s creation and features interviews with some of the featured performers, who include Dizzy Gillespie, Sonny Rollins, Art Blakey, Hank Jones and, of course, Milt Hinton. As you turn the pages Mr Kane’s monumental photograph becomes its own movie which ends with the final frame of 57 legendary musicians who have come from near and far – some meeting after years, others for the first time – are ironically frozen in time in the final frame which appears towards the end of the book, or more appropriately-speaking, to end the epic that photographic session. 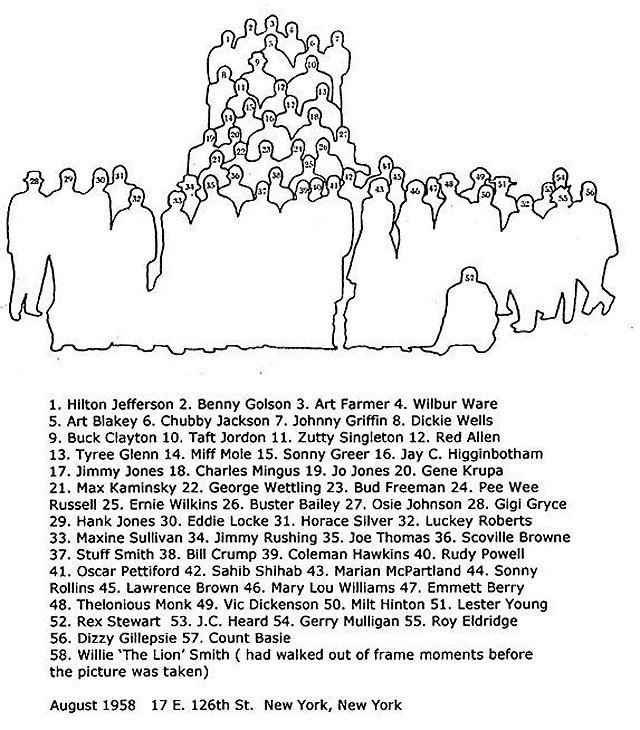 Of course, the book itself goes on and happily so as the remaining pages bring together some other great photographs by someone who became a photographer almost accidentally, but turned out to be one of the greatest of all time. The more-than-forty pages begin with a key to the photograph, and continue with short biographies of each of them. There is also, ostensibly, for the uninitiated, a selection of other famous work by Mr Kane including portraits of Louis Armstrong and Aretha Franklin; photographs from sessions that took place inside Holy Rollin’ churches and other venues at the heart of African-American life; photographs that capture not only the spirit of each subject but the collective soul of a people who have, without a doubt come to define one of the most compelling experiences of American life by one of its greatest photographic documentarians and editorialists who had an eye for its detail and – thankfully – his finger on the shutter of his trusted cameras as he preserved the perfect moment of every slice of life in time, for all eternity.