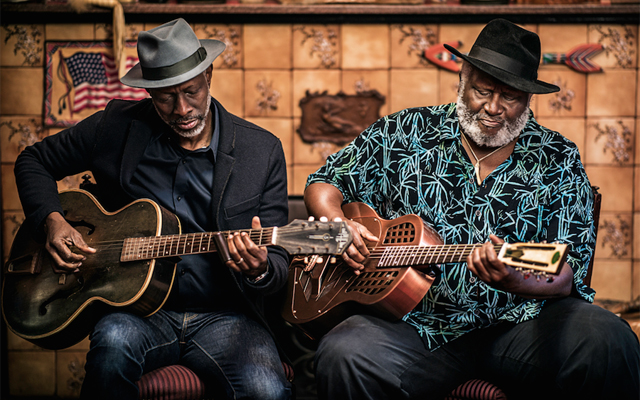 Taj Mahal and Keb’ Mo’ are giants walking the earth, one: guitar in hand and the other trailing a whole bevy of instruments; both stopping at select street corners to sing and play a chorus or two – and a whole song if you’re lucky. The result of this sorjourn is TajMo, a ‘classic first’ studio performance of the two giants together, if ever there was one. Both men have performed on stage several times before, but no recording has yet been released. And this is also a perfect reminder that all when the blues is so alive, then all is rocking, and all is well with the world.

The Blues doesn’t get much better than this; when the voice of Keb’ Mo’, as thick and sweet as Tupelo honey, warms as it falls through the air, exchanging lines with the gnarly growl of Taj Mahal in between guitar licks from Taj Mahal’s steel-stringed acoustic before they get all knotty and “tangled up and blue”. And, as if that were not enough there is a wonderful repertoire to listen to. 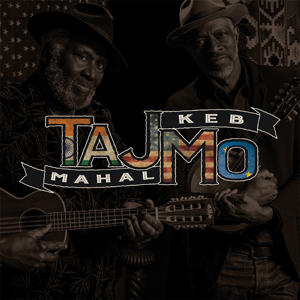 Moreover, the eleven songs are played with a fine rhythm section, augmented on no less than six songs by burgeoning brass, reeds and woodwinds together with guests – Lizz Wright, Sheila E and Bonnie Raitt – gracing the occasion as well.

The wise critic (Amiri Baraka, the “Daddy” of them all) traced all Black music – The Blues – to the Blues People, the African American. Indeed it was wiser, great writers and musicians: WC Handy, Ma Rainey, Charley Patton, Bessie Smith, Lead Belly and Son House, Muddy Waters and BB King, and Taj Mahal and Keb’ Mo’ who have kept the iconic form alive. Likewise the blues has been grist for the grinding of some of the wisest and greatest of them all: Duke Ellington used the blues form to flavour Jazz and the rest might have been just history had not everyone from Bird and Diz, Charles Mingus, Miles Davis and Ornette Coleman.

But it was Lightnin’ Hopkins who in the 1960s brought about a fiery revival of The (Acoustic) Blues, together with musicians like Taj Mahal, who made his own stellar contribution to this revival in all its acoustic purity when in 1972 he starred in and wrote the music for Sounder, a film by the late Martin Ritt, written by Lonne Elder III, based on the 1969 novel of the same name by William H. Armstrong. The film also capped a stellar career with some of the finest music that the Taj had ever written and performed, and in the portentous ebbing of the tide 21 studio and five live albums as leader followed, each one bigger and bolder than the last.

Meanwhile Keb’ Mo’ was blazing a virtuoso trail of his own often swapping his electric guitars for an old-fashioned acoustic guitar, a nylon string and resophonic guitar. Mo’ also played every conceivable kind of keyboard. And his bag of tricks also included percussion instruments. But best of all was – and still is – his thick-as-honey, velveteen voice with which he cries The Blues. Although younger than The Taj, by a decade and then some, Keb’ Mo’ has an impressive repertoire of his own and some of this is on TajMo, the first studio performance of Mo’ and The Taj together. Naturally the two musicians could not resist writing a few songs for together as well.

“Soul” is one of those songs that will go down as a classic song, a celebration not only of the union of souls – Taj Mahal’s and Keb’ Mo’s – but a celebration of The Blues itself. But that is just one of nine monumental performances that make this bejeweled album something to truly die for. Happily, though, it is only the beginning – the new beginning, if you will, of an ongoing celebration of a singular music by two superstars.