Home Blues The Staple Singers: Come Up In Glory 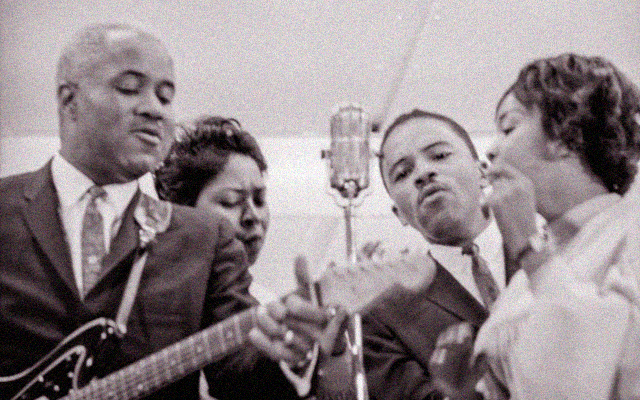 Miles Davis once told Quincy Troupe that he believed the word “legend” ought only to be used to describe “dead” people. But there are always exceptions because referring to The Staple Singers as anything but “legendary” would be a travesty. It may be a moot point now that “Pops” Staples and Cleotha Staples have both passed on, and The Staple Singers have long since (1994) disbanded. However, Mavis Staples is, at 77 years of age, still active. Still, even if Mavis Staples never made another record for the rest of her life, her reputation and that of The Staple Singers could rest forever on these Vee-jay sides that have been culled from the archives and albums recorded between 1955 and 1961.

Call them “historic” recordings because that would be most appropriate form these 28 pieces on Come Up In Glory. This first lineup included “Pops”, Cleotha, Mavis and Pervis (Yvonne Staples first joined the group when her brother Pervis was first drafted in the US Army and then again in 1970), and was centred on the light and soaring soprano of Cleotha Staples. “Pops” Staples always had her standing right next to him on stage. But Mavis Staples, with a contralto textured like raw silk soon became the centre of attraction. 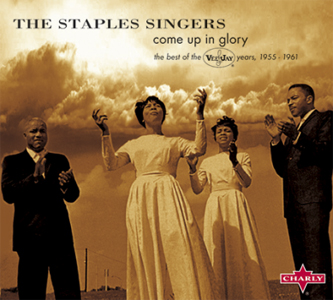 The visceral energy of her voice brought a certain majesty to the music of The Staple Singers. Come Up In Glory is dotted with her gleaming gems: “God’s Wonderful Love”, “I Could Hear My Mother Praying” “So Soon” and others are seminal masterpieces on this disc.

It’s not hard to understand why artists such as Pete Seeger, Bob Dylan and several others have been deeply influenced by The Staple Singers. Dylan cites “Uncloudy Day” as a song he was so besotted by tha he went through school mesmerised by its “mystery” (something he put down to Mavis Staples lead voice on the song). But for many others it was “Will The Circle Be Unbroken”. Musicians from Jerry Lee Lewis, Gene Vincent and Ronnie Hawkins down to The Band have fallen under its spell and, from the 6th of January 1959, when The Staple Singers first performed it continues to charm artists to this day. This song, together with many others is typical of the creative fire that lit up the skies over America and the world ever since then.

The flames may have died down in the later years of The Staple Singers but right up until the end of the 60’s the group reigned supreme. Whether delivering Spirituals and Gospel tunes or more secular songs the musicality and power of The Staple Singers are remarkable throughout these Vee-jay years, making everything the group touched their own, illuminating even the simplest phrase. Their showmanship was also as natural as their musicianship and even though there is almost no video footage of this music it is easy to see how Roebuck “Pops” Staples, with his wailing guitar lines, the magical contralto of Mavis Staples, Cleotha Staples’ luminous soprano and Pervis Staples’ rich tenor reached out to their audiences. And you can hear why a pantheon of great artists and younger musicians alike remained awed The Staples Singers, perhaps the greatest Spiritual/Gospel/Soul group of all time, and a life-force for the ages.