There are many ways to make an uplifting bluesy album, but one that manages to convey its deeply personal sources of inspiration, while at the same time welcoming the listener into the music, is surely one of the most satisfying. So it is with the second full-length outing for guitarist/keyboardist/kazoo buzzer and vocalist Julian Taylor’s commendable band, offering a set of pieces inspired by real-world people and situations but infused with the kind of heady imagination that transforms their resonances into a series of vivacious musical adventures. 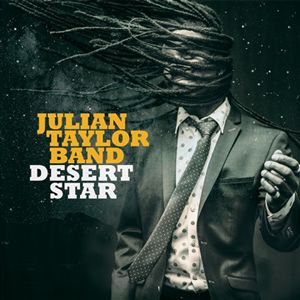 His grooves are infectious and he inhabits the many territories his music takes him into with natural ease.

Julian Taylor write alluring lyrics, many of them are in a class by themselves – literate, witty, acerbic, poignant and capture his passionate creativity, often with intimate, restrained, reflective, introspective and deceptive simplicity. “Bobbi Champagne” is a wonderful example of how all of those magical facets come together in a beautifully brooding piece. It would seem that relationships, particularly those undertaken when he’s on his knees – as in “Hot Heels” – are his specialty. That’s where his elemental howling style of voice is most mesmerising. These are not the only gems on Desert Star.

There is, however, a predominantly melancholic, or at least contemplative cast to the set. But each of the pieces is rendered with a fresh sense of thoughtfulness. “Tiny & Mighty” shows Julian Taylor not only to be in his element, but also have the full-throated roar of his band, including the brass and woodwinds. If this is an indication for future things to come, then we are all in for a real treat from the Julian Taylor Band. For now, though, with twenty-three songs on Desert Star this is a first-class ride from start to finish.